Paddling in my neighborhood – South Bohemia and Lower Austria. A proof that you don’t need huge budget and exotic locations to get the best of kayaking. 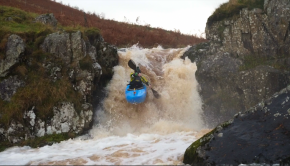