Travers took out the C1 (canoe) final on a wet and windy Mangahao River course by more than 7secs, preventing Jones from completing a notable double after earlier winning the K1 (kayak) final.

Despite picking up four penalty touches, Travers clocked 134.82secs for her final run.  Jones was second with 142.09, while Australian Alison Borrows missed a gate, costing her 50secs, eventually clocking 184.61 for fifth.

“It’s definitely good to have a little bit of added competition and puts some added pressure on,” Travers said.  “She’s one of the best in the world in K1 and transferring over to C1 appears to work quite well for her.  It’s good for me to scale myself against her and is only going to keep pushing me forward.”

The New Zealand Open was the first of two big weeks for the sport, capped by next weekend’s Oceania Championships in Auckland at the new Vector Wero Whitewater Park.

Earlier, Jones had picked up just one touch in a dominant K1 final display, clocking 109.75, with Frenchwoman Camille Prigent second in 114.11 and Amber Maslen (Great Britain) third in 119.53.

Another Olympian, Australian Lucien Delfour, took out the men’s K1 final with a clean 96.44sec run, just 0.08secs ahead of Martin Dougoud (Switzerland). Mike Dawson was the best Kiwi in fifth, hitting two gates at the bottom of the course to finish 4.64secs behind the winner.

It was a confidence-booster for Delfour, two weeks after being pipped in the final of the Australian championships, putting him in a good space before next weekend’s Oceania championships.

“I’m still trying to get my fitness back to where it was before and it’s taking a little while,” Delfour said.  “There’s work to be done before next weekend but I was definitely happy with the win.” 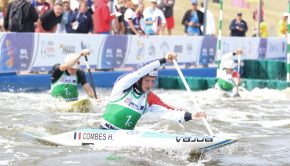 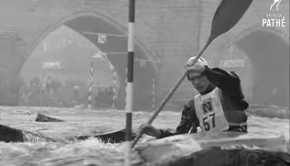