INTERVIEW : Bren Orton
From being a crowd favorite at the 2015 Freestyle Worlds to going huge at Stakeout to being claimed as the Demshitz’ adopted son, Bren has already made a name for himself in the world of kayaking. Yet in a world of serious competitors, Bren’s humor and humility are what stand out most.

DISCOVER – Whitewater Revival in Columbus, Ga
The town of Columbus, Georgia took down an old dam and enhanced the revealed whitewater, resulting in a new, deep South paddling hotspot where fun, bouncy whitewater draws kayakers, rafters, and tourists year round.

EVENT – 2015 ICF Freestyle Worlds
Held on the world class Garburator Wave on the Ottawa River, the 2015 Worlds pulled off a highly professional ICF event on an amazing feature that excited both athletes and spectators – it was the best of both worlds.

EXPLORE– True North : Beyond the Arctic Circle
The 700 km from the Arctic Circle to the Northern Cape has remained a blank spot on the treasure map of Norwegian whitewater. In July of 2015, four German paddlers spent a month exploring this area’s remote whitewater riches. 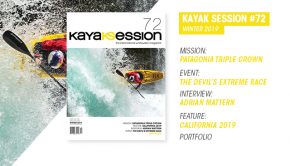