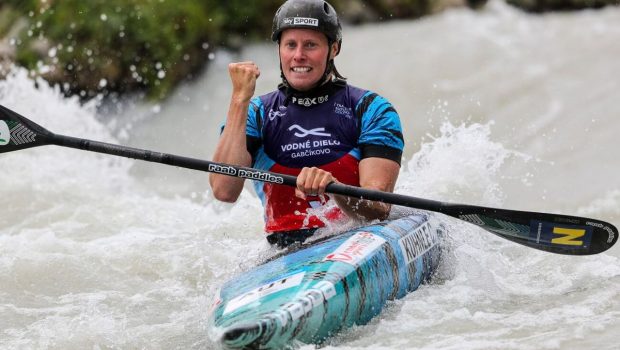 Austria’s Corinna Kuhnle and Germany’s Franz Anton picked up the gold medals on the first day of finals at the second ICF canoe slalom world cup in Bratislava, Slovakia, on Saturday.

Both athletes have previously celebrated significant career milestones in Bratislava. Kuhnle won her second K1 world title on the course, while Anton won his first ever world cup medal as part of a German C2 boat.

You can download all the women medal runs here

It proved to be another challenging day for many of the world’s best paddlers. Among the casualties were France’s Rio 2016 Olympic champion, Denis Gargaud Chanut, who once again failed to make the C1 final, and Rio bronze medalist, Takuya Haneda of Japan, who also fell at the semi-finals.

Kuhnle showed a welcome return to form in the women’s K1, posting a winning time of 99.71 to edge out New Zealand’s Olympic silver medalist, Luuka Jones, on 100.65. Germany’s Ricarda Funk was third in 102.05.

“I’ve been struggling a bit with the last two races, so I feel like I’m getting back to my race performance,” Kuhnle said.

“I think just for my self-confidence this is going to give me a good push in preparation for the world championships.”

For Jones it was her first ever world cup medal.

In the men’s C1, it was reigning world champion Franz Anton who did the best on the difficult Bratislava course. Despite running into trouble at the bottom of the run, Anton was still able to post a time of 96.02, and then watched on as all five paddlers after him came unstuck.

“I was expecting a winning time of maybe 93 or 94. I now have a good feeling for the next world cup, and I am looking forward to my next race at home in Leipzig.”

Rio 2016 silver medalist Matej Benus did the best of the three big-name Slovak paddlers, finishing second in 96.32, while Luka Bozic of Slovenia was third in 97.32.

Among the surprises on Saturday was the performance of 15-year-old American, Evy Leibfarth, who made the women’s K1 final at her first ever world cup.

The teenager ran into trouble on her final run, and finished 10th, but will have the chance to redeem herself when she competes in the women’s C1 on Sunday. 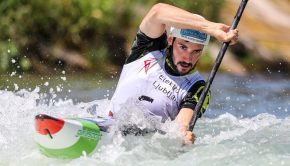