KS: Hey Joel the season is about to start up there on the Ottawa. You guys at Wilderness Tours and Ottawa Kayak School took over River Run this winter. What will be the major changes?
JK: Well, we’re pretty excited about the acquisition. It’s a win for everyone really. The key staff from RiverRun are excited about the ownership change and the future ahead. And kayakers will benefit greatly from more access and better services. The previous ownership wasn’t very hospitable to kayakers… There are other perks too like it also enables us to connect the existing trail system from Wilderness Tours to River Run and key points along the river for hiking, biking and skiing, for those who aren’t as keen on actually getting IN the water.

KS: Looks like there is the beginning of a dispute because you are re-instating the fees for the take out. Why is that?
JK: Yeah man, there have been some pretty heated words being thrown around. I’ve heard it all at this point now; name-calling, half-baked philosophies, threats. One guy even said my dad should drown himself in the river, which is a pretty insane reaction. Historically, the takeout access for the Ottawa has always been a paid access point. And we only offered it free of charge for just a couple of seasons between the 2007 and 2015 World Championships, both of which we hosted.

KS: For those who do not know (or know very little) about the Ottawa scene, tell us about the private land owners’ attitude – tired of having herds of kayakers using their property and leaving all sorts of detritus – that are now blocking most access points.
JK: That’s definitely too harsh of a statement. The majority of kayakers are very respectful. There’s an AWESOME group of people who paddle this river regularly! I would say the issues stem from the “semi-regular” users: those who feel entitled to the access points, yet at the same time don’t share the same commitment to river stewardship as the locals do. I pick up A LOT of garbage, all the time. Cigarette butts count as litter, guys & girls, pack that stuff out!

KS: So then why reinstate the charges?
JK: It’s a combination of factors really. We pay a lot in land taxes (we privately protect roughly 2,000 hectares of land along the Ottawa River, keeping it pristine), we pay a lot in liability insurance (as a bigger operation, we expose ourselves to lawsuit risk with every single person who uses our land), and we pay a lot in road and utilities maintenance. Kayakers are the main benefactors of the prime access we provide, so why shouldn’t they help pay some of the costs? Pristine shorelines and perfect access points are amazing, and they should always be available to use. But for many reasons that all costs dollars, and we shoulder almost all of those costs. All we’re asking is that the paddling community help us keep the river a paddling paradise by chipping in a little.

KS: So are you guys blocking all options for kayakers on the Ottawa? They pay or they do not paddle?
JK: That’s definitely not true! There are in fact free public access points on the river, above and below the whitewater section; but it’s true they aren’t in very convenient locations. The only other takeout option is 6km downstream from our takeout, and most of the paddle is flat water. While I’ve done that section many times for fun and fitness, the average kayaker just wants to paddle the best section of the river and then take out. What we offer is that ideal takeout location, with well-maintained roads and services.

KS: What do you say to those that would say: « Those guys are making so much money already, why do they charge kayakers? » What is the cost for a company like yours to keep the road, the parking lot and all the surroundings clean and net?
JK: Well, the margins in the outdoor business are pretty thin. So while we may run big numbers in terms of clients, we also support a gigantic employee base. Seasonally we’ll employ as many as 150 people. And we have a core of roughly 12 year-round full time staff. They support their families year-round with the wages they earn here, while we only take in sales for 4 months. By the start of every single season we’re burning into the red ink borrowing money to keep that payroll going until the clients come back. No river company in Canada (not to mention on the Ottawa) can say they do that.

KS: What do you say to those that would say: « Those guys do nothing for the paddling community, all they do is take.”
JK: That’s one I’ve heard a lot, which I’m floored by when I hear. Hosting the World’s last summer was a net loss of $97,931.08 CDN (€68582.36 EUR). We knew it was going to be a loss financially going in, but if WT/OKS didn’t step up, the event as it took place would never have happened. That was the same situation when we hosted Worlds at Bus Eater in 2007. We host every major competition on the river and are on the forefront of freestyle, worldwide. We also donate kayak lessons and raft trips EXTENSIVELY to help support people coming to the river who otherwise would have major difficulty doing so. This summer we’re bringing our second young Peruvian to the Ottawa for Keeners in the name of our late great friend Juanito. And as I’ve already mentioned, we privately preserve 80% of the pristine shoreline through this section of river from development.

KS: In other words, you are just asking the community to participate in the maintaining roads and infrastructure, is that right?
JK: Exactly, WT/OKS underwrites almost all the land preservation on both sides of the river. The area we conserve is almost at 5,000 acres, which is why paddling the Ottawa is a pristine experience yet is within a 5 hour drive of 15 million people. On that acreage, we built many km of trails too with free use making the Ottawa a paradise in every season.

KS: How does the cost of access at the Ottawa compare to the Green River in NC, for example?
JK: While paying for access isn’t necessarily the norm everywhere, it’s not that unusual either. The two other most popular rivers in our area, the Gatineau and the Rouge both charge for access. On the Green River in NC boaters are expected to pay for a $60 USD “Green Key” every year to maintain access. Most provincial and National parks charge entrance fees. There is a cost to owning and maintaining land that can’t always simply be absorbed just by the land owner. I think it’s fair that river users help with those costs. And sure, call me biased, but I happily pay for river access whenever it’s required when I travel to kayak. We offer a day rate but also a season’s pass for regular users. Our season pass price is $65. Considering the current exchange rates, that’s cheaper than a Green Key. If you wait to buy, it goes up to $85, making it just a little more expensive than a Green Key, but we also offer way more in terms of access than what they pay for.

KS: What kind of service improvements can kayakers expect over the next few years on the Ottawa?
JK: It’s hard to guess at a timeline, but a dedicated shuttle-bus system is high on the list. More services like paddling shops and food/beverage at the takeout is on the radar as well. I’ve heard hot tubs would be welcomed too 😉

KS: Anything else we should mention.
JK: Yes. WT/OKS is all about community and everyone winning! While some people say we are being destructive to the paddling community by charging a fee to use our takeout, I would argue that we’re really the only ones actually doing real things to develop the paddling community locally. We sell land parcels at well below market value to foster kayaker home-ownership here. We work out extremely favorable business deals to cultivate other local businesses like Whitewater Brewing Company, Horse Country Campground, Whitewater Village and more. We’re also looking for ways to develop good options for seasonal lodging for paddler use. This is just the beginning of what’s really happening here and we encourage everyone with an idea for complementary business ideas to reach out. The Ottawa is a dynamic place to be and it’s only going to get better. A real paddling community is taking root here. 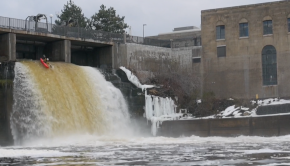 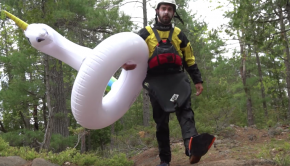 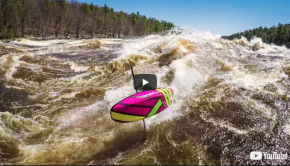