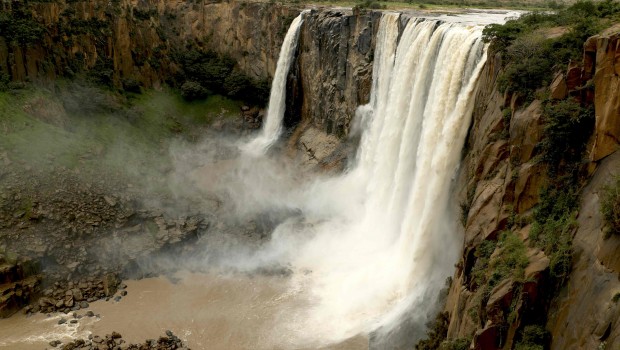 The Transkei area is in the Eastern Cape province, South Africa, means across the Kei River. It remains a very rural and underdeveloped place. Locals go about their daily lives calm and peaceful, many still depending on horses and other non-motorized forms of transport to move around.

It’s a place that will change your outlook on life and once you have been there you’ll never want to leave. It seems like a land lost in time, miles and miles of lush unspoiled green fields with countless aloes and proteas lining the hills and valleys. It’s also a kayaking heaven , where you have to work hard and if you time it right it usually delivers the goods. Just outside a little town called Maclear is Tsitsa Falls Backpackers run and owned by AD (Adriaan Badenhorst)  and his wife Angela, they live totally off the grid. Sometimes less is more and once you’ve been there you can understand why. With AD being a kayaker himself and having done the majority of first descents in the area Tsitsa Falls Backpackers is the perfect base for any kayaker looking to explore the whitewater of the Transkei.

For years I heard stories of the Transkei and what a perfect place it is for kayaking with countless rivers and waterfalls. About a year ago I decided to experience it for myself, I figured it was going to be amazing but what I found was world class rivers and so many of them in close proximity. Sitting with AD under the Transkei starlight around a fire, discussing all the multi-day trips in the area, he told me about a first descent down the Lower Tsitsa Gorge. He talked how beautiful it is in there and how it boasts some proper expedition style whitewater. From that moment I became obsessed with it and knew I had to get in there and experience it for myself. 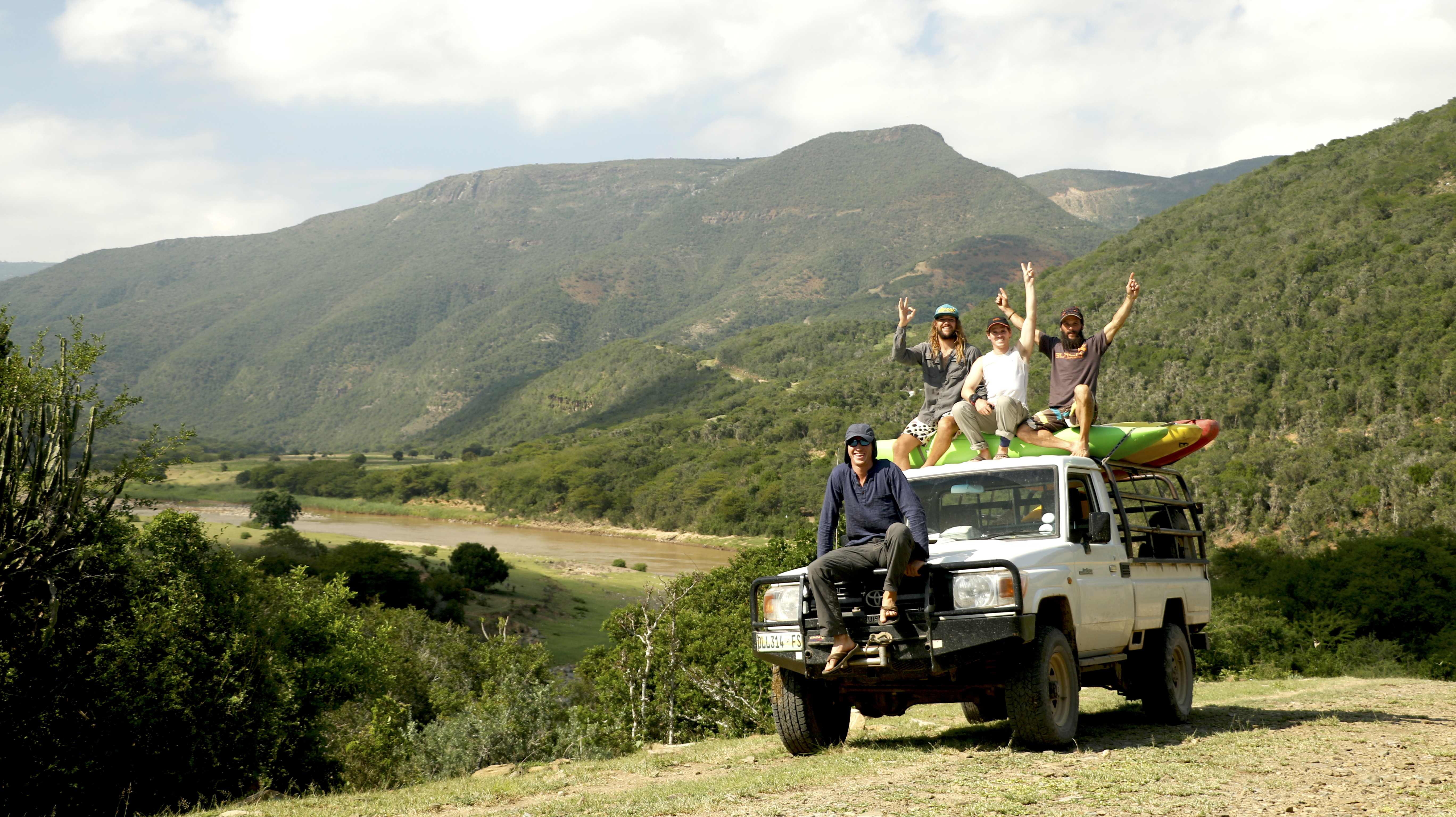 A year later we made it a reality, after speaking with AD the date was set. A team was assembled and a month later Marius Gerryts, Scott Reinders and myself met up with AD at his home. The very next day we took a drive to the put in to check on water levels and inform the local police of the Tina Falls village police station that we were in the area and what our plans were. Water levels looked higher than the first descent mission but good and the Police were shocked to hear our plans but very friendly and happy to have us in the area and even offered to do the shuttle for us.

That afternoon, I realised that it’s a bit of an art to pack 4 days-worth of supplies into your kayak. Thankfully, we managed to fit everything we needed in. As night approached we were sitting around the fire when reality dawned on the group on what we were about to do – paddle down the extremely remote Lower Tsitsa gorge. If anything goes wrong in there you have to able to sort it out on your own, in other words “keep your shit together”. I went to bed hoping that we had prepared well enough for this 60km 4 day expedition. The gorge has only been descended twice in 10 years. 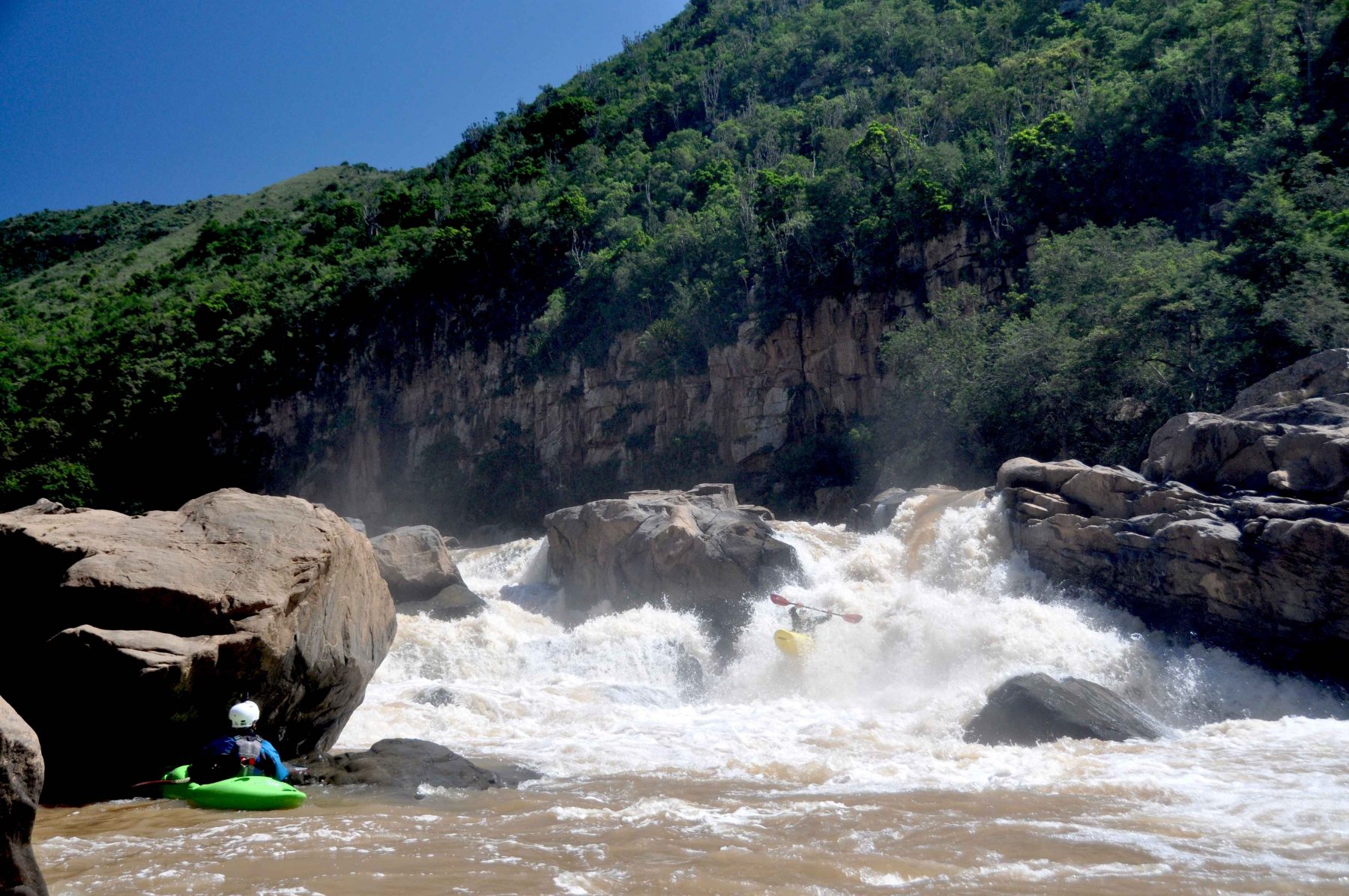 The next morning filled with excitement and riddled with nerves we were on our way to meet up with Lieutenant Feke from the Tina Falls police station. He welcomed us with a big friendly smile and introduced us to our allocated driver. It was comforting to know that we didn’t have to worry about the shuttle and that our vehicle would be safe and sound at the station over the next 4 days.

Arriving at the put in standing on the rim of the gorge gazing at the waterfall that drops 125m into a deep, untouched, completely boxed in gorge was mind-boggelingly beautiful but intimidating at the same time. I thought to myself how lucky and privileged we are to be here, to still have such a special and unspoilt place on earth. We made a few last phone calls put (heavy) boat to shoulder and started walking down into the gorge. 30 minutes later, after a steep hike, we reached the river. Dwarfed by the 200m high walls of the gorge we felt humbled by the pure beauty of the place. Once in the gorge there is a complete change in vegetation, it seems like a different world, unscathed by humans and our way of ruining places like this. It still felt surreal as I pulled my sprayskirt over my kayak .

We did not have to paddle far to get some action, the first 3km were filled with impressively steep rapids and a nice clean 5m waterfall.

Then we arrived at a horizon line, mist sprayed up into the sky creating a rainbow as the sun streams through it. 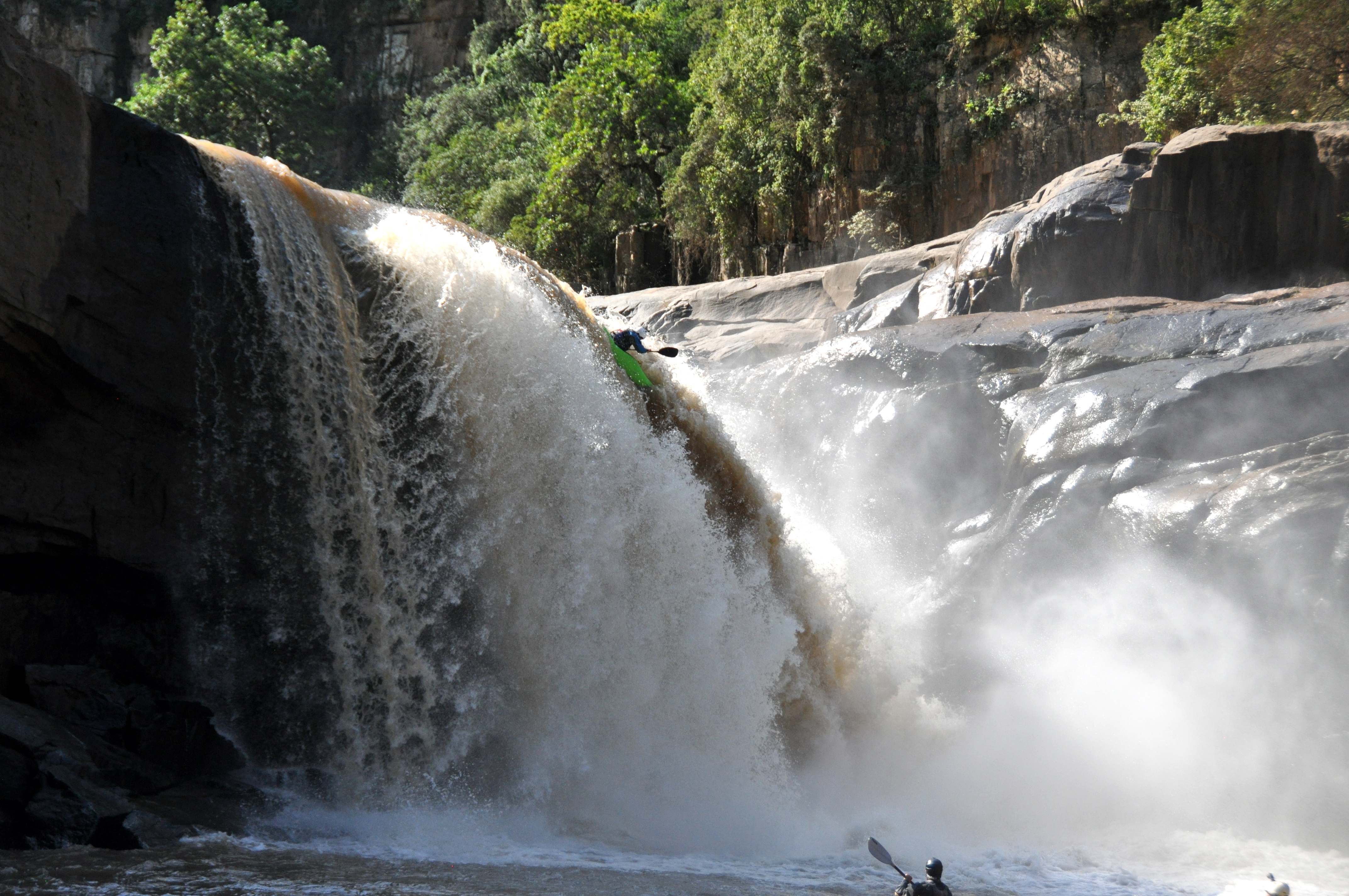 After scouting we knew that we’ve arrived at the crux of the gorge we called it ‘The Intliziyo’ which means Heart in the local isiXhosa language. A rock shelf divides the flow of the river in 2; on the left you have a 14m waterfall and on the right a 10m slide into a 4m waterfall and after that seems it like the whole river just plunges of the face of the earth. With daylight fading, so we decided to make camp just above this.

This is the best part of a multiday trip; setting up camp, making fire and enjoying good company. Sitting around the fire I took a moment to appreciate my surroundings and in that short period of time you can hear, feel, see, taste and smell the gorge I realised that this is just a normal day for this place, we were only visitors. The next day bright and early we packed up camp. I will admit this is not my favourite part of a multiday trip, trying to fit everything back in to your kayak again and knowing you’re going to have to do it three more times.

Applying all our knowledge, experience and skill sets we managed to navigate the crux section of the river safely. The next few hours were filled with rapids that kept us focused and awake, some of them needed bank scouting but the majority of them were done by boat scouting. Upon scouting one of the rapids we came across a fresh leopard print in the sand bank right next to the river, with an abundance of baboons in the area it did not surprise and we were happy to know that they were still roaming free here.

During the afternoon we reached a 12 metre waterfall that we knew never had been run before and after scouting it we could see why. It starts off with a slide that pushes most of the flow left off the drop and into a slot that has a boulder lodged between the cliff wall and the waterfall, needless to say if you go left , you won’t be coming out. There was an eddy just above the falls on river right, putting in there would be the best chance to keep right on the drop. 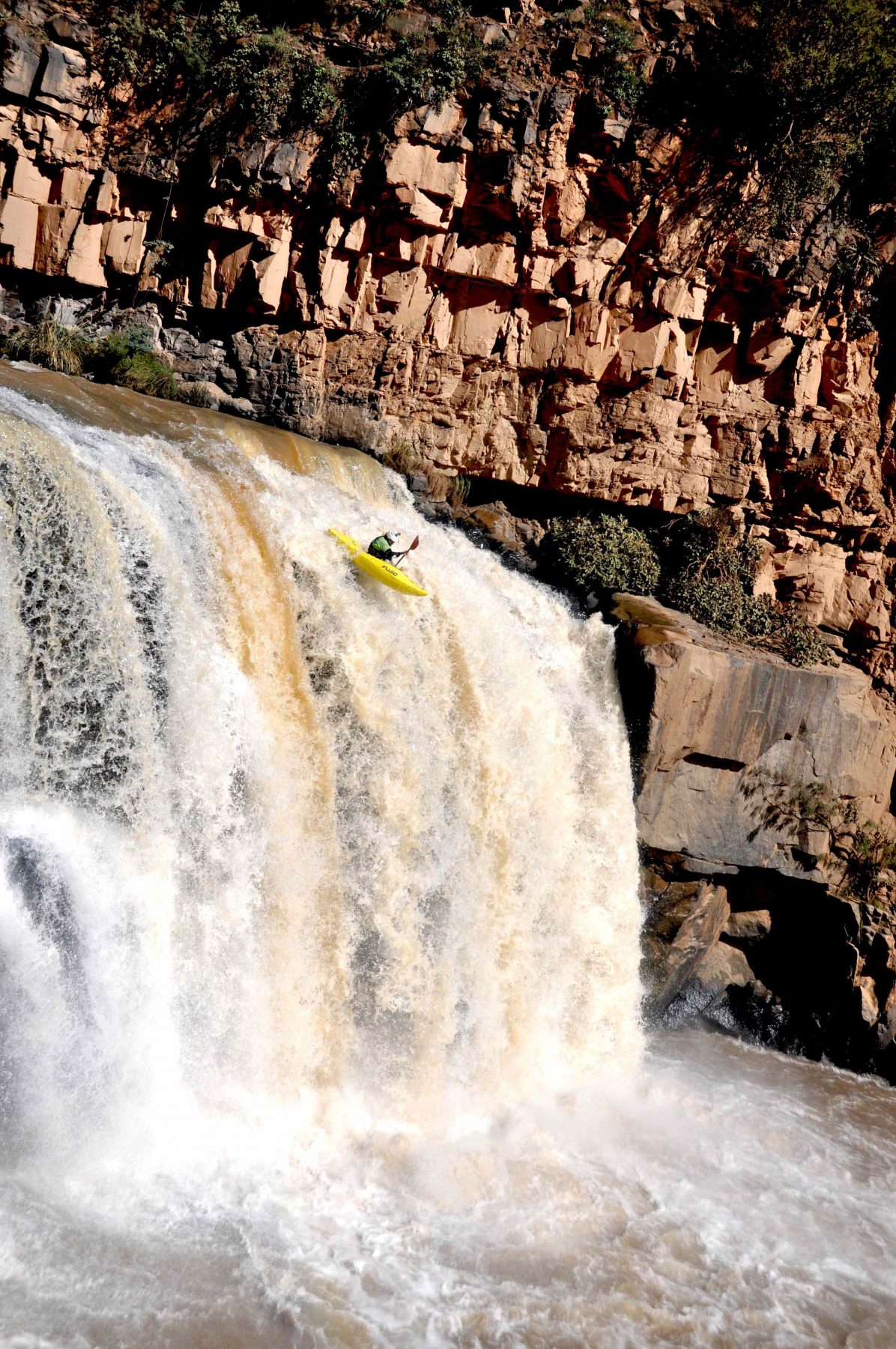 When it comes to first descents there is always a doubt in your mind on whether it’s a good idea or not. You need to break it down take it step by step, do a risk assessment and trust your instinct. Why do we do this you might ask, well it’s a test, a challenge, a craving that needs satisfying. After taking all the risks into consideration Scott and I made up our minds that we were giving it a go. AD and Marius opted for the sketchy portage. 30 minutes later we got the call on the radio that they were ready for us, AD sitting in his kayak in the pool below for safety and Marius filming. I pulled my sprayskirt on, visualised where I wanted to be, what I wanted to do and off I went. Time slowed down as I went over the lip of the waterfall, seeing I was on line I gave in to the feeling of euphoria and then just like that it was over and I was in the pool below celebrating with a fist pump and a high 5 from AD. Scott came down soon after and he had a perfect line, we sat in the pool below the waterfall still pumped full of adrenaline just grateful to have experienced something so extraordinary. There’s something special about knowing that you are the very first people on earth to do something. With our souls content we made camp, just as we thought that life couldn’t get any better we were treated to a full moon, lighting up the whole gorge, giving the best ending to a fully lived day. 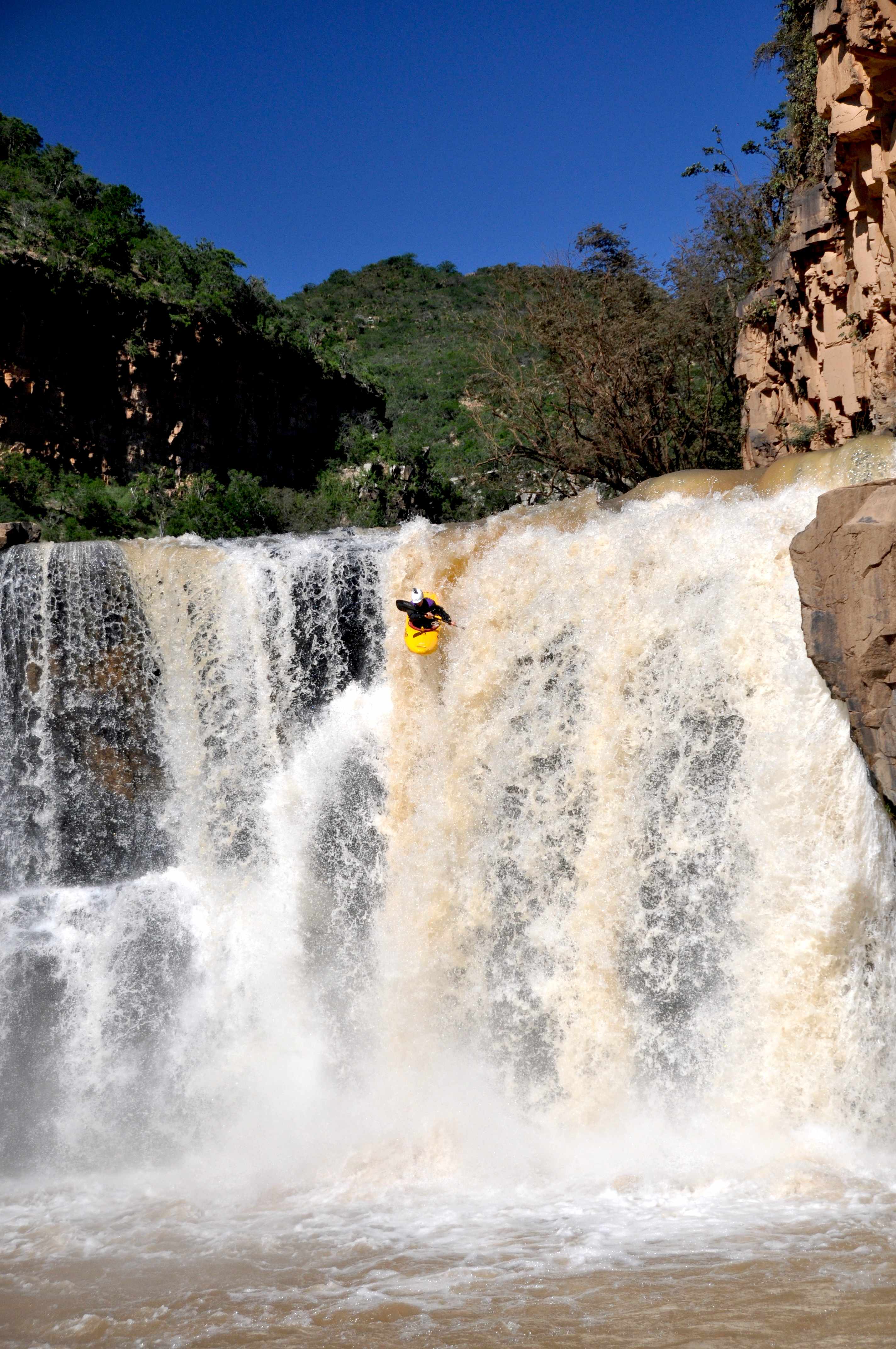 The next day we got on the water early, to make up lost time. We had only done 10km in the first two days and still had another 50km to go. The river became a bit calmer, but still offered some exciting whitewater, as the gorge started opening up it transformed into a deep valley spoiling us, once again, with majestic scenery. Signs of civilisation started to appear and to our surprise  the confluence of the Tsitsa and Tina river  snuck up on us, this was our take out. We had pushed a bit too hard to make up time and found ourselves at the take out one day too early. I was filled with mixed emotions happy and grateful that we had all had safe passage through this awe-inspiring gorge but saddened that this experience had come to an end and it was time to step back into the ‘real world’. I was not only saddened for myself but for the Man sitting behind a desk knowing nothing of this place and who most likely never will. I felt anger towards our government for the dam they plan to build further upstream making this expedition even more special as we might be the last kayakers that this place sees. Privileged to have the skill set and knowledge to be able to do such a trip. 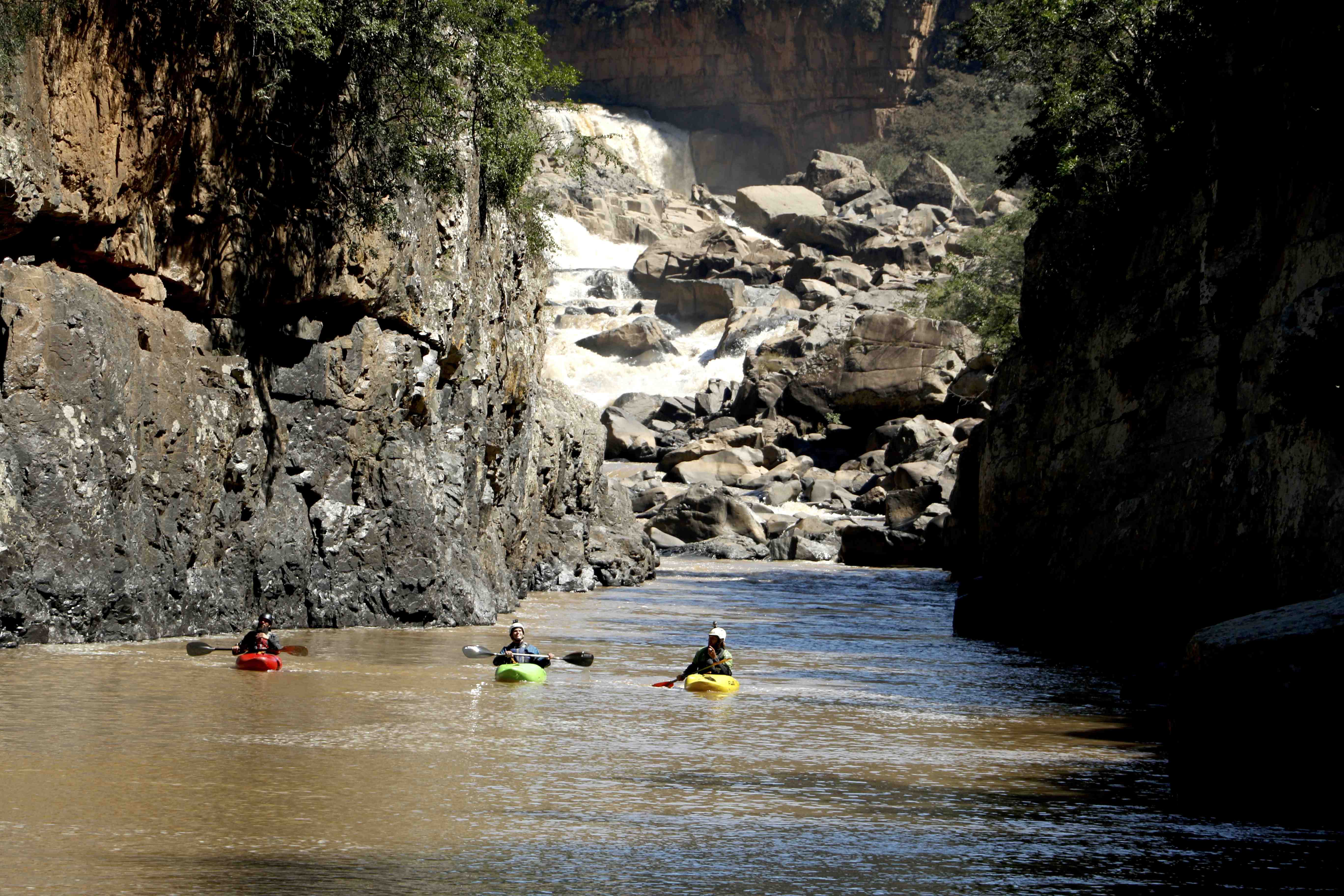 My curiosity for this section is tamed but not cured, this is now just a memory however this trip has touched me in more ways then I could have imagined. It’s the simple things in life that matters.

What is success? The amount you have in your bank account? The car you drive? The work you do? People have different ideas and definitions of success, for me it’s to wake up with a smile, doing what you love, satisfying your soul and having a positive impact on someone else’s life. That’s the beauty of a trip like this. You get to know yourself a little bit better. We went looking for an adventure, a challenge and what we got was way more.

At the take out,

More info on paddling in South Africa check out dewetkayak.com 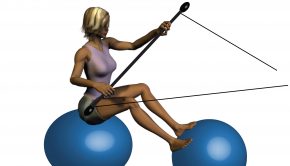