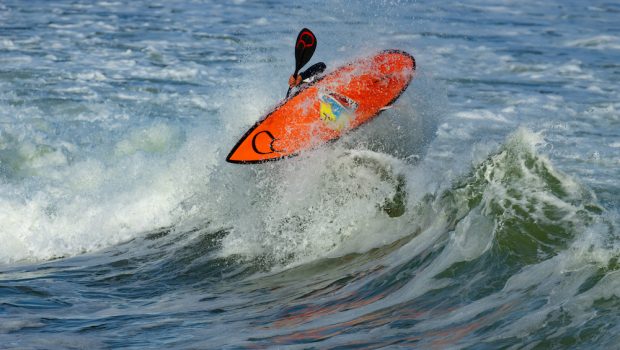 Cast your mind back, if you can, to October 2019 and, if you will, picture Easkey Castle, County Sligo, Ireland.  A 13th century stone monolith that has stood watch over Easkey left since before Easkey had a left. Under this towering structure the closing prize giving of the Irish open surf kayak and wave ski competition took its annual place. Mention Covid 19 at that point and I am sure the gathered competitors would have assumed it to be the name of a new boat design. No one could have anticipated the difficult times to come or that a global pandemic would grip the world. Now bring yourself up to date, October 2021. The Castle must once more withstand an onslaught. The Paddle surf Ireland Irish open is back! The first post, or almost post, pandemic Irish competition.  The respect given to the break was solidified when the entrant list was published. A gaggle of internationals peppered with native stalwarts gave rise to great excitement. A former world champ even made it out from the boat building shed, and ultimately into two finals. Run over one day the only thing left in doubt would be whether Easkey left would continue to deliver good competition waves.

Walking through the ‘paddock’ on the morning of the event the buzz was palpable. An array of camper vans, surf craft, drying but never warming wetsuits, the smell of cooked breakfasts and coffee has been an experience missed greatly in recent years. For many this would also be the first social surf event in two years. The assembled crowd seemed equally excited to reconnect with their paddling family as much as with winning their heats. A festival atmosphere was fast developing, sound tracked by conversations years in the making. Many internationals had arrived early and scored some excellent waves and would stay on to hopefully score more.

The competition site did provide competition waves but, as is not usual for the break, they were smaller. Paddlers had to work hard to judge the break, constantly hunting for waves, using all their local knowledge of tides and the reef to predict where they could hit scores and ultimately progress. Travelling paddlers had to rely on their, extensive, competition experience to mitigate lack of local knowledge. The standard was high despite the challenging conditions. Strategy on the part of many entrants resulted in an intriguing and sometimes ruthless display of wave riding.

For judges and riders the day was going to be long. The sun set as the last finals wound down and a waxing crescent moon gave the prize giving an ethereal theme. Some of finalists had been surfing all day and as one boater reminded me, he had been in wet kit all day. Surely there is no greater testament to the desire to be out on the water once again challenging for the title of; Irish open Champion 2021.  With deck flashes, tail slashes and a French air the finalists booked their place.  Hulls and fins were introduced to the reef and upturned ‘drop in’s’ got a little passing ‘tap tap’ which all added to the spectacle. Jack Barker took the HP crown home to England with him but Irish man Kieran mc Dyre succeeded in keeping the IC title on home soil. Travelling French man Cyril Samson didn’t go home empty handed with a win in the wave ski. A fine display of surfing gave the ladies HP win to Tamsin Green. Up and coming paddler Megan Gamble claimed the ladies IC trophy. Lucy Mc Queen Jones triumphed for England in the wave ski class.

As Sunday dawned the Small challenging competition waves gave way to glass. Sizeable surf rolled in which enabled paddlers to, possibly not cure, but at least tolerate their hangovers. Early risers were rewarded with good sets, long rides and the inside wave the French wave ski legend Caroline Angibaud christened, the Guinness wave. The standard was impressive to watch and it showcased how paddle surfing has progressed. Again calls were made to host an international competition here, but it would seem the Irish open is fast becoming an International competition of note.

No prizes for participation are awarded at the open but many were just delighted to finally be able to take part in something. Enthused to be surrounded by a community they had sorely missed, to be social rather than socially distant. To Zoom across waves rather than zoom calls, I could go on! While so much has been lost and so much endured in recent years the feeling I will take from the competition is one of anticipation. There is so much to look forward to again. So many old friends to reconnect with, and new community members to meet. Time to be spent doing the things we enjoy with the people who make those things all the more enjoyable. The tough on the water surfing and desire to win was matched only by the warmth and sense of enjoyment off the water. Interferences and wave calls were soon forgotten, well almost forgotten, in the spirit of community and togetherness. As the saying goes in Ireland the *Craic was mighty. 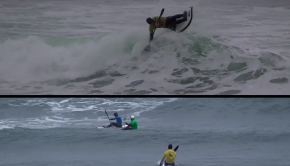