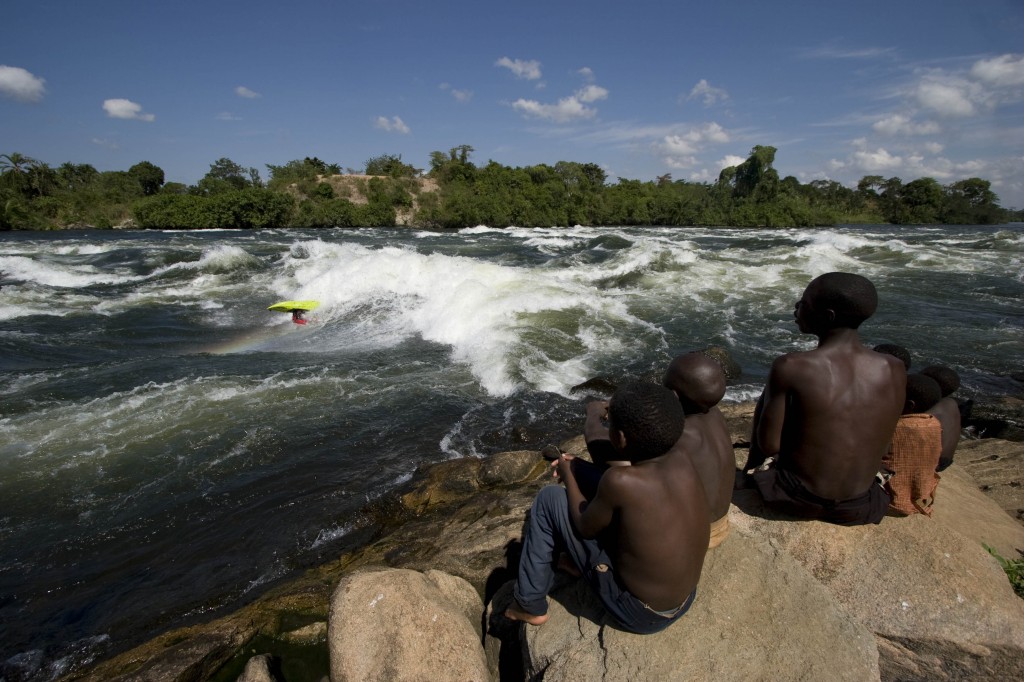 When John Speke sought the source of the Nile in the late 1800s, the thundering rapids he found were hardly an attraction. It took another full century before whitewater kayakers made their own discovery of the place, and the rapids that gave Speke pause were exactly what the paddlers embraced. Within a decade, the White Nile was THE place to be for the world’s best freestyle paddlers. 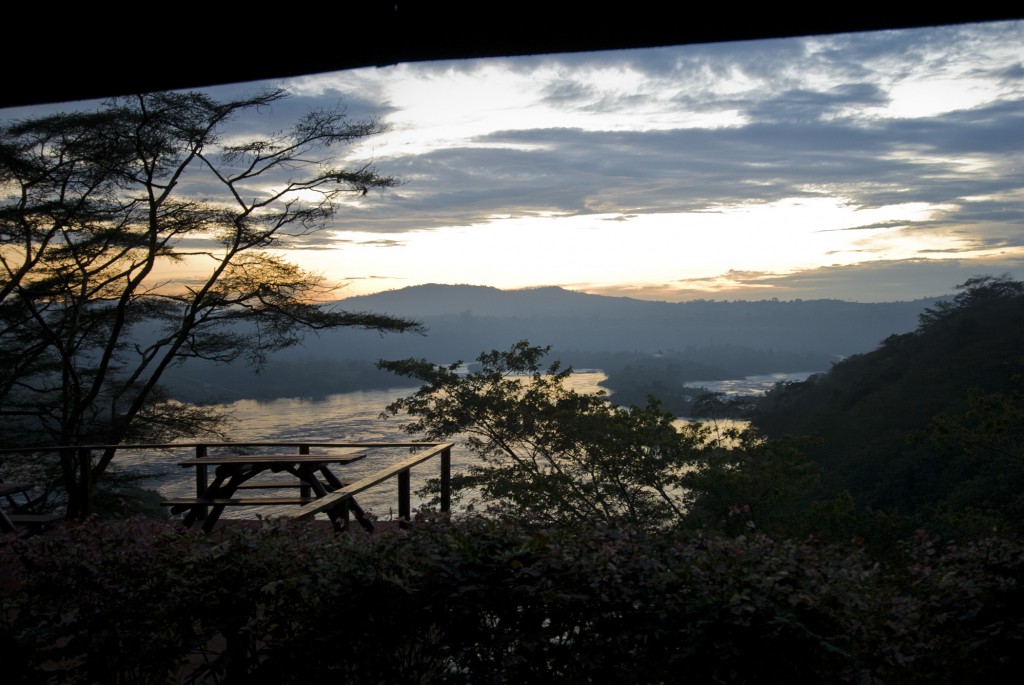 Several factors make the White Nile a world renowned whitewater destination. The river is huge, usually flowing between 1,000 and 1,600 cubic meters per second. There is enough water here to form several large rivers, and that is essentially what happens when the massive waterway splits into multiple channels over the course of a 70 kilometer run. All that water, spilling from the inland sea of Lake Victoria, is comfortably warm yet refreshing enough to provide some relief from the air, which is usually Africa-hot. Despite the sometimes oppressive heat, the locals are remarkably friendly. Packs of bright eyed children openly approach newly arrived kayakers with the familiar phrase, “Jambo mzungu,” which means “Hello white person” in English. On top of this welcoming reception, there is the whitewater. 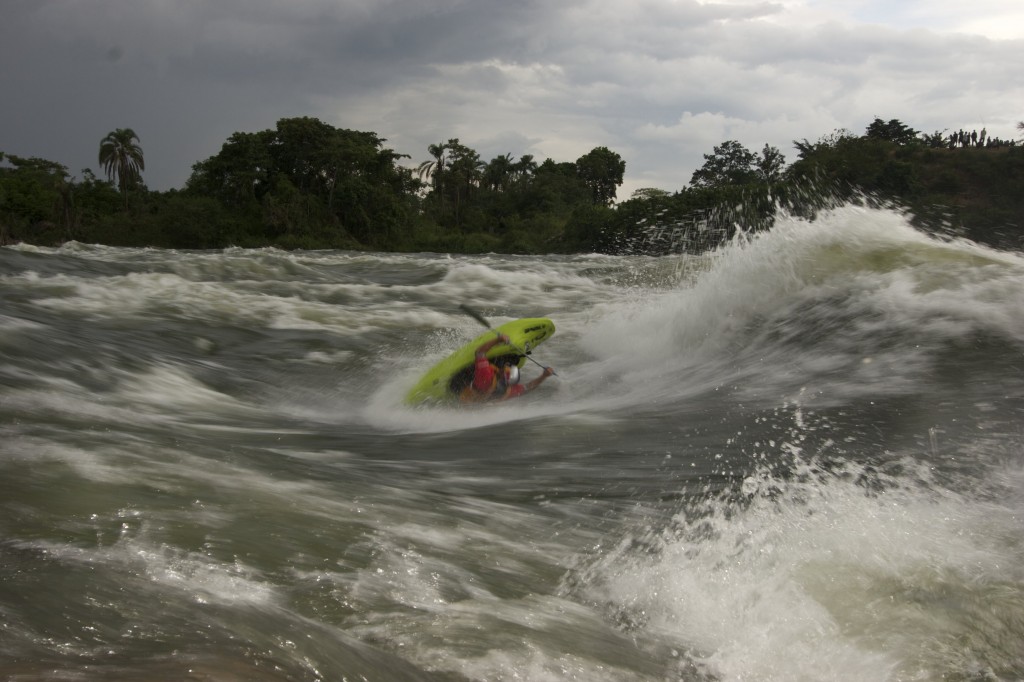 The hydraulic features of the White Nile are the stuff of legend. With such a large volume of water, it doesn’t take much to form a respectable surf wave. Yet, not only is the water of the White Nile compressed into relatively narrow channels, it also slides over bedrock shelves, recoiling into waves and holes that are on a scale better suited for giants. The Nile Special wave is arguably the world’s best big water surf spot, and it is just one among dozens of play features here. Bring your play boat to the White Nile, because that’s the game.

Boda Boda’s are to the White Nile, what the yellow cabs are to New York City. This is how most paddlers run shuttles to get back to the top – it developed a real economy down there… ©L Alsheimer/kayak session mag

Intimidating class V lines also exist, hiding in the lesser known far channels. This is the perfect training ground for kayaking’s elite, both in freestyle and big water river running. Before taking on the world’s biggest volume rapids (the Inga Rapids of the lower Congo), Steve Fisher and his team came to the White Nile. If big water bravery is your thing, you’ll have run most of the White Nile’s gnar within a week, sound preparation for the Murchison Falls section farther downstream, where the friendly countryside surrounding Nile Special is exchanged for frontier wilderness; armed militias on river right, aggravated hippos on river left, and hungry crocodiles in the eddies. These hazards have kept this landmark section mostly un-run, with just a dozen total descents in history. 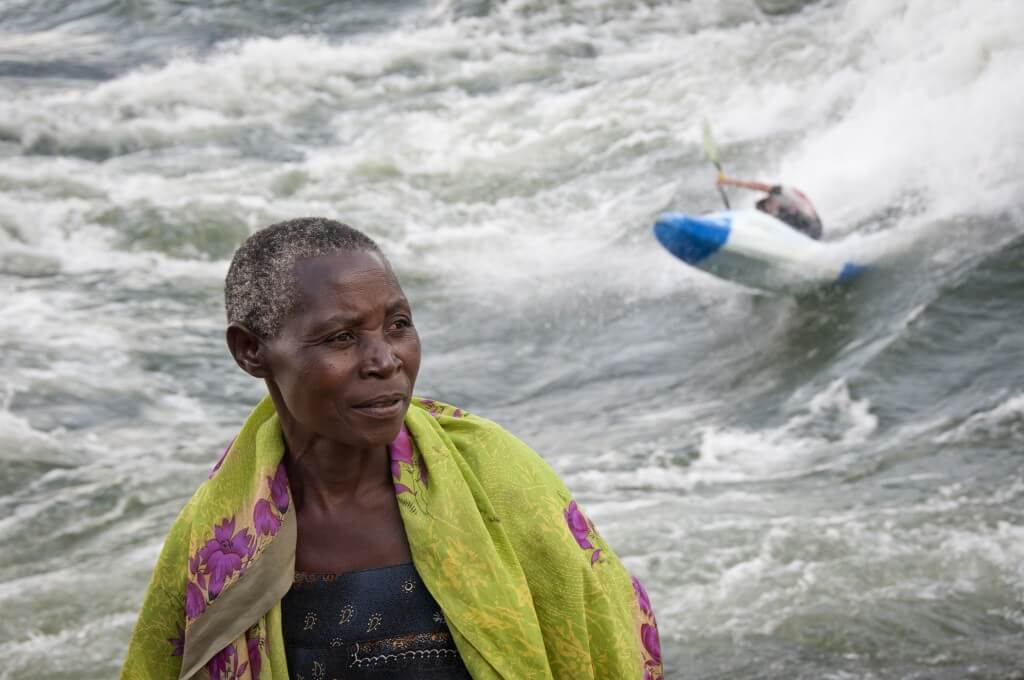 Ugandan lady on the White Nile river banks with Freestyle kayaker in the back ground – a usual scene in Uganda. ©L.Alsheimer/kayak session mag

Murchison is certainly the place for high African adventure, but the big water play near the town of Jinga is the place for pure African fun. It’s warm, it’s cheap, it’s friendly. It’s the White Nile.