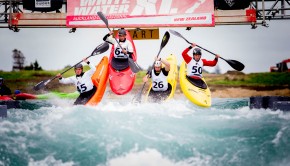 Paddlers rave about Whitewater XL – Words & Photography: by Jamie Troughton/Dscribe Media It started with a flourish and ended with […