Follow the crew « Tribulations Project » on their trip in Colombia, here are some of the greatest  colombians classics, creeking and [… From the 12 th to the 15 th of February, in Antioquia, Colombia, will be held the first annual Samana [… 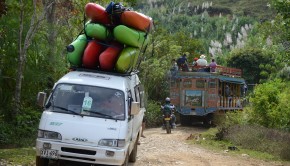 The jungles around Medellín are thick and mountainous. Once controlled by guerrillas and drug lords they are now relatively peaceful […

The second part of a two month trip in Colombia. The team changed, some friends came and we decided to have […