Last summer, filmmaker Geoff Stewart set off to shoot a film about river-running that has been years in the making. Now, after seven years of writing, solidifying his cast and crew, and filming in an environment that can only be classified as treacherous at best, his film Going Dark is in the final stretch, with the goal of premiering at the 2018 Sundance Film Festival.

Going Dark follows a group of river-guides embarking on an epic expedition from the source of a wilderness river, all the way down to where it pours into the ocean, paddling the entire length in inflatable kayaks. Stewart, along with several other members of the crew, are river-guides themselves, with a deep appreciation for the natural world and the waterways that flow through it.

One of the central themes of the film revolves around the transformative power of river-running. Because of this, a substantial percentage of the film’s revenue will be donated to LEAP, a non-profit organization that empowers those facing extraordinary life challenges by providing therapeutic wilderness programs.

According to Stewart, “Ultimately, our story is about the benefits the natural world, especially wild water, can offer anyone brave enough to accept the call. In this very divided time, filled with more pressing issues and causes than you can shake a stick at, a movie following a group of river-guides through the wilderness may seem far from significant. But this is the same world that delighted, challenged, and transformed our ancestors for millennium and one that, despite our recent separation from it, has the power to not only reunite us with each other, but also with the truest versions of ourselves.”

While a handful of feature films showcase river-running, Going Dark will be unique in giving the audience something they have not seen before: portraying whitewater as paddlers experience it, up close and personal. To accomplish this, the production team—made up of a motley crew of film professionals with no river experience mixed with adrenaline-junky river-guides with no film experience—took on the challenge of capturing the best whitewater footage ever seen in a feature film. They secured their cameras inside waterproof housings and balanced the brave operators between two inflatable kayaks which were strapped together. Then, following or leading the actors, the crew would descend into whitewater chaos.

“Usually, whitewater is filmed from either the bank, drones, or GoPros. And while we did use each of these methods, our best shots came from being in the water, at the same level and close to the on-screen paddlers. That’s the best way to make audiences actually feel the vulnerability each paddler must face when navigating a meaty rapid, but it’s also a very risky way to film,” said Stewart. “Our crew was courageous. Everyone stepped up in pretty astonishing ways. We didn’t have any stunt doubles, just a surplus of pure, old fashioned cojones.”

LEAP is a 501(c)(3) non-profit organization dedicated to the empowerment of individuals facing extreme adversity. By partnering with organizations that serve people affected by significant health issues, emotional/psychological distress, and social/economic adversity, while offering those populations wilderness adventure programs, LEAP provides a lifeline to the healing and restorative power of nature. More at Leapadventure.org 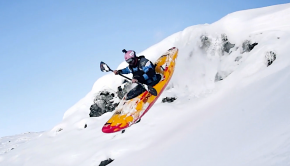 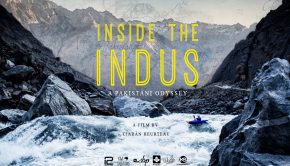 MOVIE RELEASE: Inside the Indus – A Pakistani Odyssey is Finally Out. →