For the past couple years, I have heard about the Kaituna river. How its such a great training ground and how its an amazing river. Showing up and spending time there, I came to realize that the river is amazing. But even more awesome is the small community of boaters living at the take out. Day in and out, waking up and paddling together. Living in this weird/wonderfully strange community. A magical place where the hour or the day is irrelevant. A place where swimming the river or number of laps down is the only relevant thing from day to day.
By: Caleb Roberts From: Canada 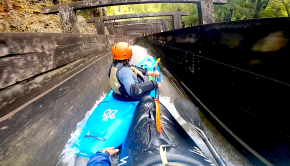