High quality video recap from the crew at River Roots, of the 2013 North Fork Championship, held on the infamous North Fork of the Payette river in Idaho. Spectacular! (full length article in the kayak session #47, fall 2013)

It seemed as if the North Fork Payette rose to challenge of the North Fork Championship, as paddlers came from all across the world to compete. The day before the event the NF Payette came up to a challenging and awesome flow – showing it’s classic impressive identity.
Thursday, mad inspiring times were placed in the Expert Division early Thursday morning. This set the tone for how stiff the competition of the NFC in its second year would be. Kayakers from all over the globe had made their way here to hangout and party but more importantly they were here to compete.
The endurance and athleticism that were shown that morning shines a light on kayaking as a legitimate extreme sport and not just a past time.

Competitors were out for blood to race down Jake’s.

Friday was a continuation of this energy as the first NFC BoaterX went down on S-Turn rapid. Hundreds of people came out to witness six paddlers at a time fight for the fastest line down this wild rapid.
Saturday, the stage was set for the heavy weights to battle it out. The Red Bull Ramp was ready and tunes were cranked. The nerves and stoke level were palpable. After an intense moment of silence dedicated to those that have lost their lives before us – it was on. The top athletes from across the globe flew off the ramp one at a time into the mayhem that awaited them. The lines were extremely difficult, the whitewater violent and unpredictable, but every competitor knew with this crew that someone would stick the line. Everyone rose to this challenge. The camaraderie elevated to the top as athletes helped each other with their lines. Competitors styled the course as hundreds of spectators could be heard over the roar of Jacob’s Ladder + Golf Course.

The level of kayaking had been pushed yet again.

The awards ceremony in Crouch went off the chain as a new NFC King was crowned! This wild international crew continued partying to DJ Revolve’s Disco jams at the Dirty Shame as everyone celebrated our wonderful sport in true fashion – EPIC RAGE!
The second year confirmed that the NFC is here and it’s here to stay. A huge SHOUT to this amazing river and all the AWESOME people that make the NFC happen!
We are excited for this event to continue hosting the highest level of competitive kayaking.

Directed and Edited by Rush Sturges 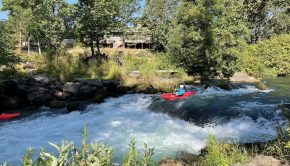 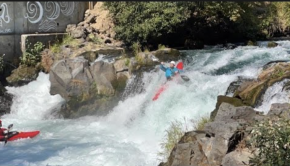