Kicking off the Short Film of the year awards is Caleb Roberts with a film featuring Canadian rider Benny Marr. [… 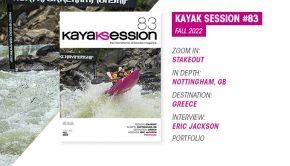 Zoom in: Stakeout legacy – Progression + flow in eastern Canada For some, the opening of the Canadian border meant [… Ben Marr Gets Funky on Buseater Follow Dane Jackson, Ben Marr and Bren Orton, on a high water run of the  South Yuba in California Cold and Frustrated, Stores from Stakeout – Ep. 4: Searching for Waves