Check out one of the coolest and funniest extreme paddler out there – Anton Immler’s  – showreel from 2014. A collection of [… 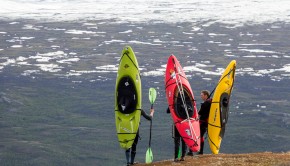 Other Rivers (Searching for Rivers in Northern Sweden)

In my grandmothers apartment, I found an old photo album. Page after page showed beautiful pictures from the Swedish mountains, […

A wonderful day of springtime Creeking in Dalarna, Sweden

“We think we can control the river, but really, we are all at the mercy of the water. Respecting the […

This summer I felt like competing less and rediscovering some of that pure joy of kayaking down a beautiful river. […