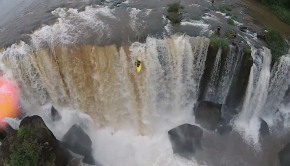 The category 4 Hurricane Joaquim brought some serious rain to the South East of United States. With flood warnings and […