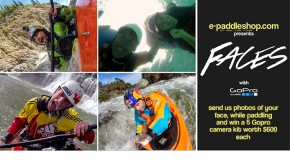 FACES is a new online event organized by Kayak Session Publishing, presented by E-Paddleshop.com, and powered by GoPro The concept [… In May of 2013 I was in an accident that nearly ended my paddling career. Another kayakers bow made contact […

GoPro- Learning to roll the 2015 Jackson Kayak Fun with Mary

Check Eric EJ Jackson, teaching out a beginner paddler, with no experience rolling a kayak, going from start to finish […