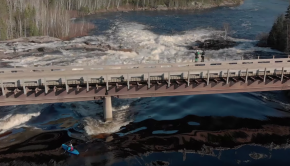 Watch Nouria Newman run Real Bridge Rapid on the Betsiamites River in Quebec (Canada). « The last rapid before taking out at [… Here in Quebec we have a disease called Winter Blues. Everything is frozen. Rivers stopped flowing.We can ski. We can hike. […

Jacques-Cartier Nord-Ouest is a mission. Definitely one of the sickest place we’ve seen tho. This river is the main tributary […