Watch and read that incredible video + article on why Quim Fontane, one of the world top Freestyle rider,  is at home on the While Nile in uganda, a paradise that fades…

Palm trees still try to hide behind the fading fog that comes out from the Nile, the far bank of the river gains clarity with every second of sunlight as the sun rises above the horizon. A thousand noises of strange animals, crystal streams and leafs moved by the breeze become the most beautiful harmony I’ve ever heard, the heart of Africa is still beating here, by the river. Elsewhere nearby the rainforests where wiped out many years ago along with their wildlife and the natives have forgotten their old ways of living thanks to the new perspectives and promises of progress and democracy, ideas that came from the utopic occidental world.

This morning a local fisherman woke up early to make the best catches; he has the knowledge of 1000 ancestors that have been fishing on the same banks for a thousand years. Powerfully slapping the surface, the fisherman makes noises that scares the fish and drives them towards the fishing nets. Every year he has to spend more hours in the river and go further in order to fish enough to maintain his family; he has 5 sons. Now, more than ever he’s thankful to have all the wisdom of his ancestors, he can only go on because his father showed him the best spots and techniques, so as the father of his father did with his son. The fisherman thinks that his older son will soon be old enough to help him and start learning all the secrets of his job, he keeps thinking while he recovers another empty fishing trap. Suddenly a great noise of an explosion invades the entire valley and a few scared birds fly away. The fisherman knows what these explosions are. The Isimba Dam works started a few months ago, rumors say it will be finished in two years. A great feeling of emptiness and sadness invades the fisherman. After all –he thinks- maybe it’s better to send Oscar to the capital, there will be no fish left when the dam is finished and he will have a better opportunity to find a job there…

BEEP, BEEP, BEEP… The alarm wakes me up, there’s only one place in the world were I like to wake up early and this place is the Hairy Lemon. My name is Quim Fontané, but here I’m also known as “MUSSUNGU”, in fact all the white people here are. In some ways I like this concept as Ugandans make absolute no difference between my Japanese friend Sabu and me, we’re both just mussungus, we all come from the same place, the occidental world. The only problem is that by definition being a mussungu makes you stupidly rich in the eyes of any Ugandan and unluckily this is not the case in most of the kayakers I know.

I usually go for a walk around the island after getting a cup of coffee while I wait for the breakfast to be ready; I like siting on the grassy beach and stare at the banks of the Nile that are still foggy, this morning a fisherman was working not very far from where I was. I was watching him for a few minutes throwing his net with skill when Sabu called my name. – Breakfast is ready Quim!

As usual we had breakfast together; pineapple, passion fruit, mango, bananas and other tropical fruits were on the menu, Sabu is a bit obsessed with the airscrew and keeps asking me for tips to land them straight. I happily throw him some ideas I’ve been working on to sharpen my style on the airscrews that he happily takes, visualize. He katas it right there in his pure Japanese style with a banana on his mouth, he’s a funny lad and a good friend.

After breakfast we wait for half an hour before we ask for the rope and go paddling, on this season, the water levels tend to stay high so Club Wave wouldn’t come in in most of the mornings.

When the water level is 2 fingers below the blue mark it’s time to go kayaking!

You just need to get the rope, a bottle of water, the camera, the tripod, money for the kids, put some sun cream on and you’re off for a session on the best freestyle playground on earth!

There’s a 10-15 minute paddle up before you get to the Nile special rapid, I like to spend this paddle up counting the different animal species that I can spot; from monkeys, dragonflies and huge monitor lizards, to snakes and a million species of birds. My record is 25 although for a regular paddle up you can count between 12-18 species.

Oscar is already there most of the times ready to work for a few hundred shillings; he’s a skillful and trustful worker and can handle the camera, work as the rope kid, bring fruit from the village at good price… When he is filming he never ever misses a single one of your rides, I always use him and pay him more than we agree for his services.

In my 3rd trip in Uganda and without any major competition happening soon on a wave, the trip was all about the joy of surfing, improving my skills and trying new tricks, combos and techniques without the pressure of the competition and with the main objective to improve my style.

To my mind style is found on the details, but it’s not a detail, it’s an overall, a whole thing in your paddling that makes you different and exceptional. I have a huge respect and admiration for all the stylish paddlers out there; Mathieu Dumoulin, Devyn Scott, Ben Marr, Aniol and Gerd Serrasolses, Dane Jackson, Bren Orton, Thomas Richard, Paul Palmer, Seb Devred, Pat Camblin… just to name a few. Some of them don’t even compete, but they are my true inspiration to continue pushing myself to the next level.

I think this was the trip where I have learnt the most, had more fun and improved the most in my entire kayaking career, just because I took things with more ease than usual, I didn’t get pissed off when my tricks didn’t work and I just tried and tried over and over again without losing my nerves. Enjoying every session and every surf, every Nile special, morning in the hairy lemon, party with new friends and a book.

The sessions always started with the basic tricks; airscrews are always good to light up the fire and move on from there. I had a list of tricks and combos I had to master during the 10 days I had to train in the Nile and once done they got erased from the list. I had more than 25 tricks and combos to do and Sabu and Lowri kept adding more stuff every day when I asked them If they had any suggestions, most of the tricks they came up were impossible to my mind, so on my last day I still had a bunch of tricks to master… will need to come back to the Nile soon to complete my quest.

I also invented a few tricks that I’m quite sure that had never been done before; the supercleansuperflash is a Clean Blunt linked by a Clean Back Blunt on the same direction. The second trick is the “BacksideFlip 540” where I start the trick taking off from a backsurf position, I go inverted at the same time I rotate 180 degrees on my vertical axis and land in a front surf using the airscrew technique to finish off the trick. You can check both tricks on my new edit “Ode to the Nile” that has some great footage from both in and out of the water.

My favorite bit of the day was the last rides with the sun setting behind the palm trees in the opposite bank of the Nile, the color of the sky and clouds tells you’re burning the last minutes of the day. It’s time to pay the 1000 shillings to Oscar for his job and get back to the Lemon for dinner.

Running the rapid with the last rays of light of the day, watching the beautiful sky change from orange, to red, purple and finally dark blue, surrounded by the last remains of rainforest of the Nile, flowing up and down of the big waves of the Nile is the definitive meaning of freedom to me! I sometimes open my arms and make my biggest effort to absorb everything I see, hear, touch, taste and smell through my senses. I want to take home the memories of the Nile, a paradise that fades. The clock keeps running and we all have less and less time to enjoy this magical place.

In my way back to the Hairy Lemon my path crossed with the fisherman’s I had seen that same morning, he was going back home after a long day in the river. – How was the fishing today? The fisherman hadn’t had a single catch that day, but I didn’t know. – It was very good – he said – and offered me his most sincere smile. I smiled too. The two strangers took their own separate ways. 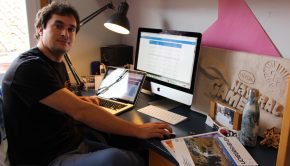 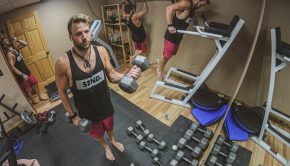