A few weeks ago the SEND crew were leaving the PNW after an awesome three weeks and making the 60 hour, cross country drive to Quebec, Canada for the big wave season. They had an epic pitstop in Idaho on the way through with the boys getting high water laps on the North Fork, Milners Mile and the elusive Bladder wave. All this under the snow… 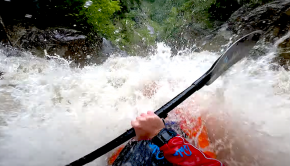