Jackson kayak 2015/16 Rockstar in Action; Watch Nick Troutman throwing a humangous airscrew in the new jackson kayak Rockstar during the 2015 stakeout in Quebec.

The new Rock Star comes in the Competition configuration, which includes an Innegra/carbon hull support and lighter seat shaving 2.5 pounds, as well as the standard version with is still under 30 pounds total weight for the medium. As always, the Rock Star comes standard with built-in Go Pro mounts to capture each surf and invert and a Nalgene bottle to keep hydrated.Available in 2015 colors, pricing is unchanged at $1199 for Standard* and $1399* for Competition version.

*euros prices to be confirmed. 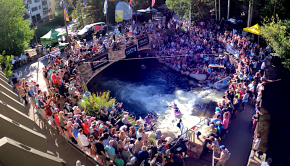