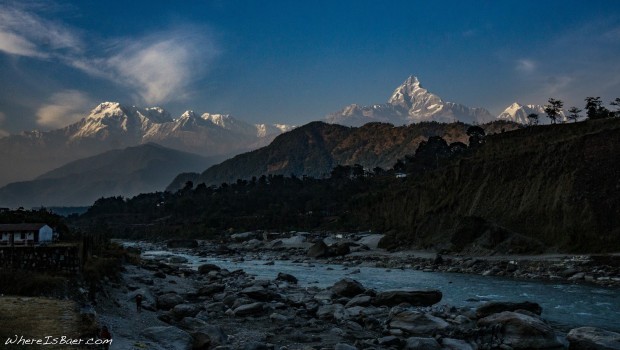 The tallest mountains in the world surround us. Their brilliant, snow-encrusted peaks seem almost dull in comparison to the vibrant prayer flags and audaciously painted structures here in the quintessential Himalayan mountain town of Jagat. From this microscopic Nepali village, Garen Stephens and myself would start yet another trip of a lifetime. The plan was simple; kayak from just north of Jagat nineteen miles to the slack water of the Mid-Marsyangdi hydro-dam, located just to the south of the town of Besisahar. 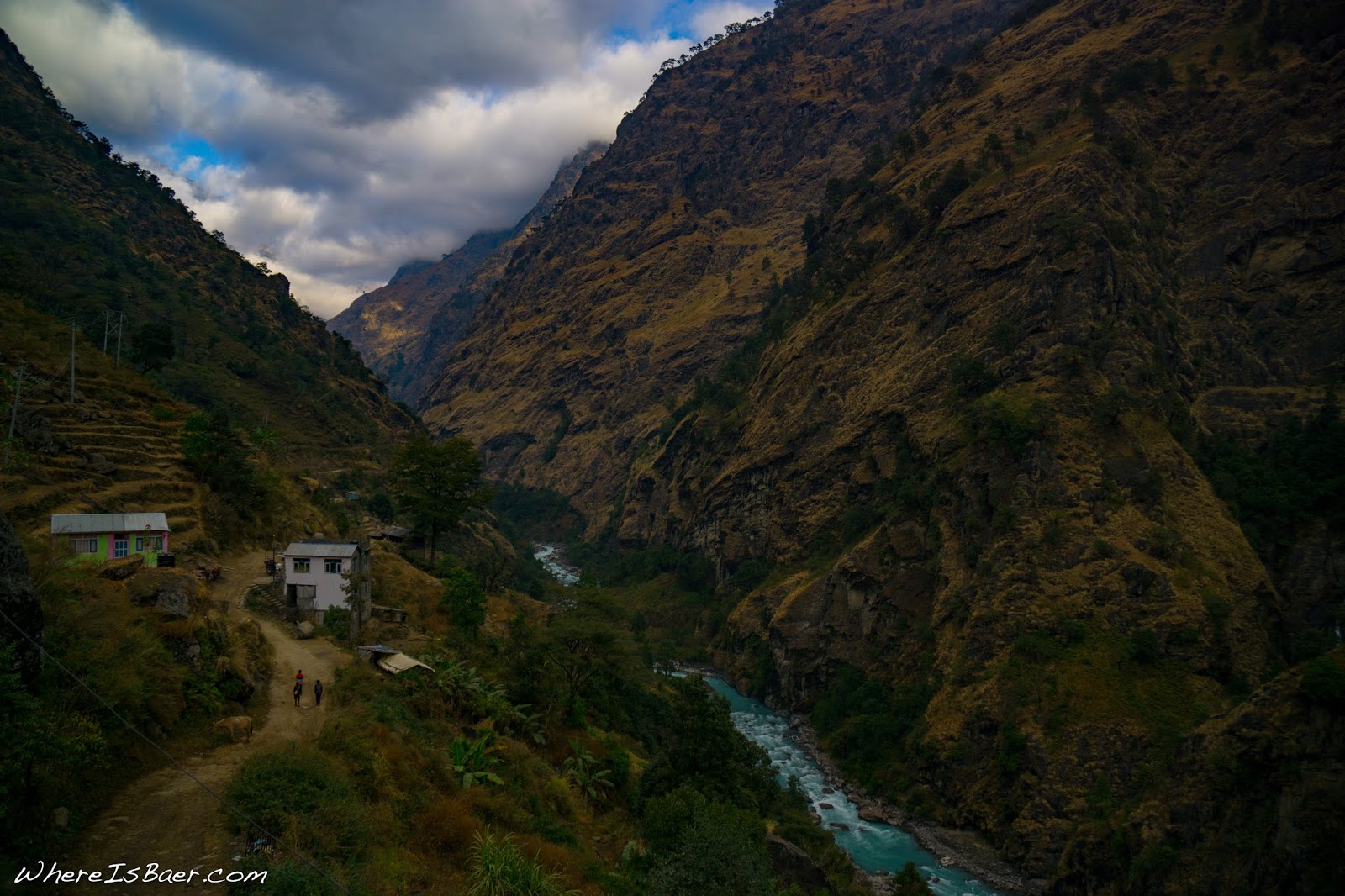 The $10 a night hotel in Jagat had a view ©Chris Baer/kayaksession.com

Just under a week before arriving in Jagat, I was meeting up with Kate Stepan and Justin Kleberg in Pokhara, Nepal. We were hashing out plans for what seemed like a fairly straightforward mission… But international logistics always seem to have a dozen wrenches in them; it’s just a matter of trying to determine where they might pop up, and how to deal with them as smoothly as possible when they do. It might be that the vehicle breaks down, it might be that your language skills fail you and you end up in a town hours away from your destination, it might be that the boats don’t fit, or they get denied, or there is sharp metal that will wear through your boat on the roof rack. Or it might be that your attempt at local haggling doesn’t work in your favor, or you get food poisoning from what looked like delicious street food, or the fact that nothing is on schedule and arriving three hours late is standard. Trying to combining what seem to be simple international logistics almost never works internationally, but when it does it feels almost magical. 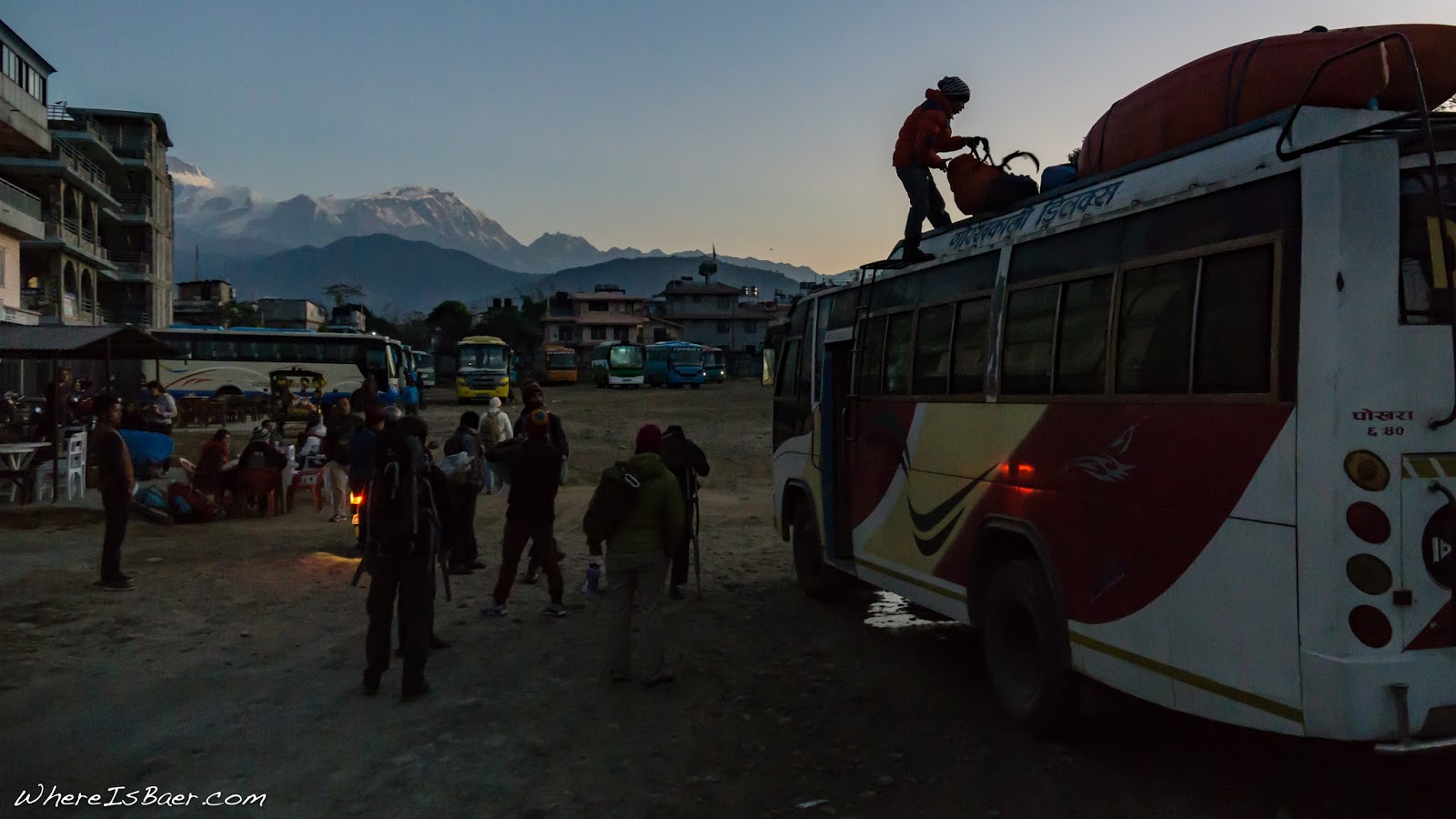 Loading kayaks for the trip to Besisahar ©Chris Baer/kayaksession.com

This first leg of the trip, we actually pulled it off: our tourist bus (has less chickens on it, and you usually get a seat) left Pokhara almost on time, it didn’t break down or get in an accident, and we arrived in Besisahar at about noon. Upon arrival, the team broke into different roles: watching the equipment, looking for a room, and searching for a jeep. With the tasks completed, we reconvened and walked to the “hotel”, tossed our bags into the room, dug out our paddling equipment, then walked back across the street to our awaiting jeep. We quickly piled boats and ourselves into the jeep and started to bounce our way up the dirt “road” to Simpani (the border of the Annapurna Conservation area). There we quickly geared up and got on the river. It was a blast! Nearly eight miles of splashy, continuous class 4 water. 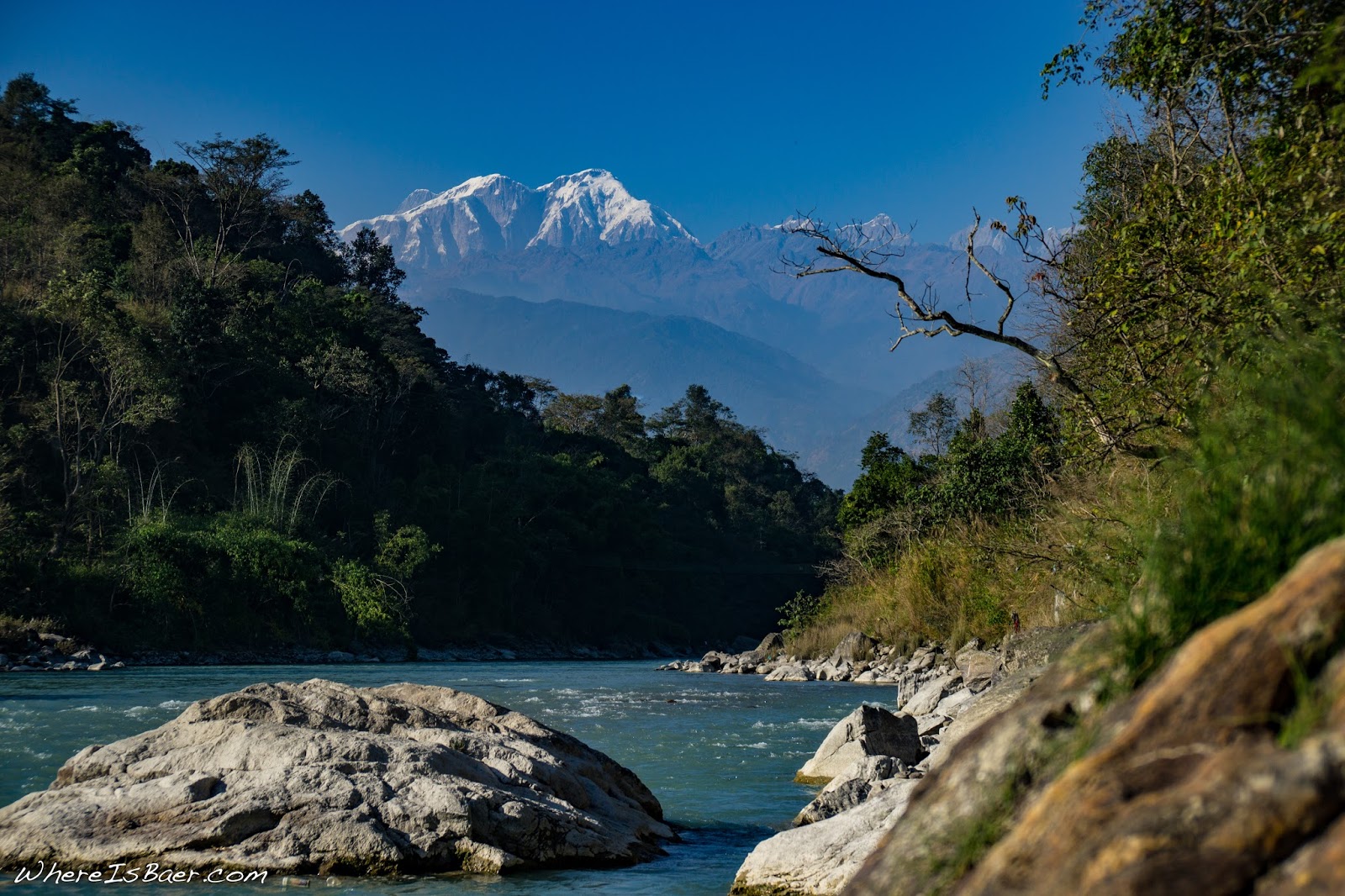 Looking back on the Annapurna Range ©Chris Baer/kayaksession.com

After two days of quintessential class 4, Justin Kleberg and I walked down the street from our hotel to the Annapurna Conservation Area permit office and doled out twenty dollars each to attain our special access permit. This would allow us to travel further up into the drainage. Four more miles up the road, we went to Lamjung and put on at the brink of yet another dam. Subsequently, the section had a portion of its water pulled out and through the hydro scheme. Although the section was partially dewatered, it had a slightly steeper gradient profile then the lower section. It was again spectacular class 4/4+ whitewater. The lines were significantly tighter with more river-wide, dynamic features then the lower section, but thankfully it was entirely boat scoutable. 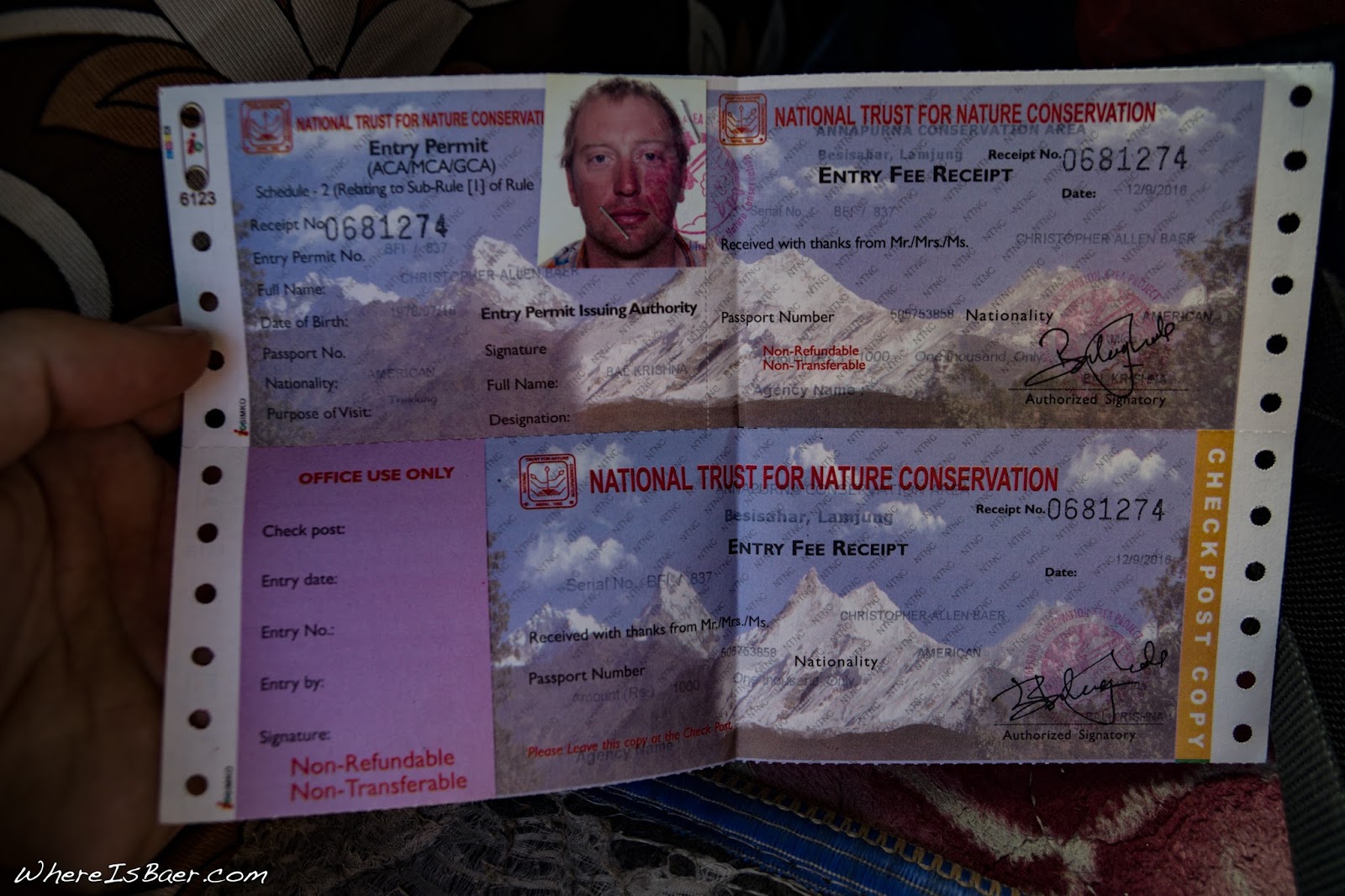 The following day, Kate and Justin had to leave, so I messaged Garen Stephens. He said he was on his way, and wanted to know if I would stick around for a couple of more days. I couldn’t say yes fast enough. The sections that we had paddled so far were classic, and a couple more laps on these gems seemed obligatory. Garen made it to Besisahar the next day around midday, and we rallied up for a quick get-to-know-you lap to make sure we would make good paddling partners. We instantly bonded and agreed it would be an exciting mission to head yet further up into the drainage. 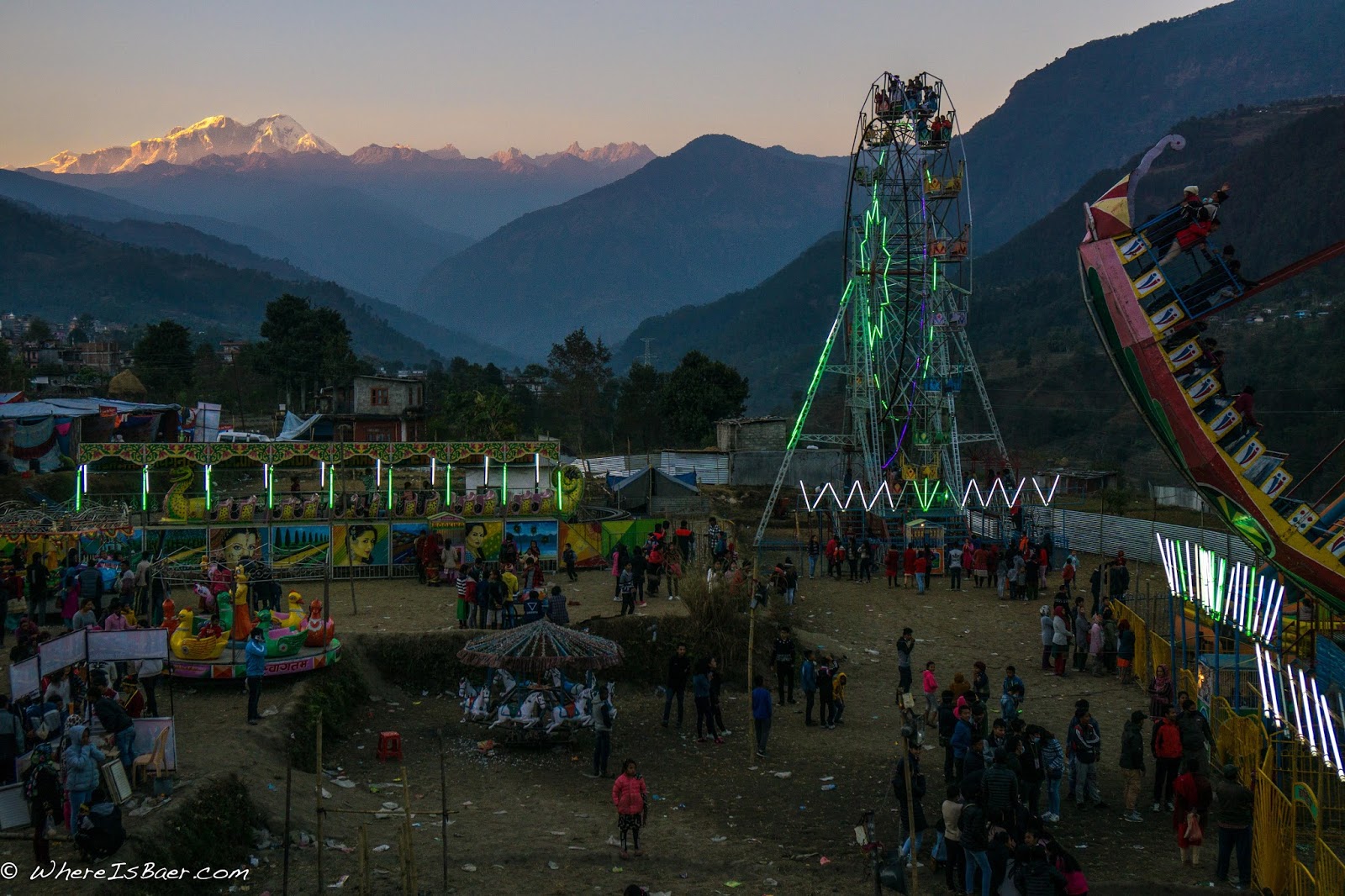 Yet Further Up the Watershed

The jeep ride got sketchier and bouncier as we continued into the upper part of the drainage. A kilometer past Jagat, the road got relatively close to the river, and we signaled to the driver to pull over. The Marsyangdi had changed character; it was now walled in and the rapids were stacked on top of each other. This section is relatively steep at 122 feet per mile, and had not been dewatered by a dam making it rather pushy. We could no longer boat scout as safely as we had in the middle section, and found ourselves out of our boats at almost every horizon line. 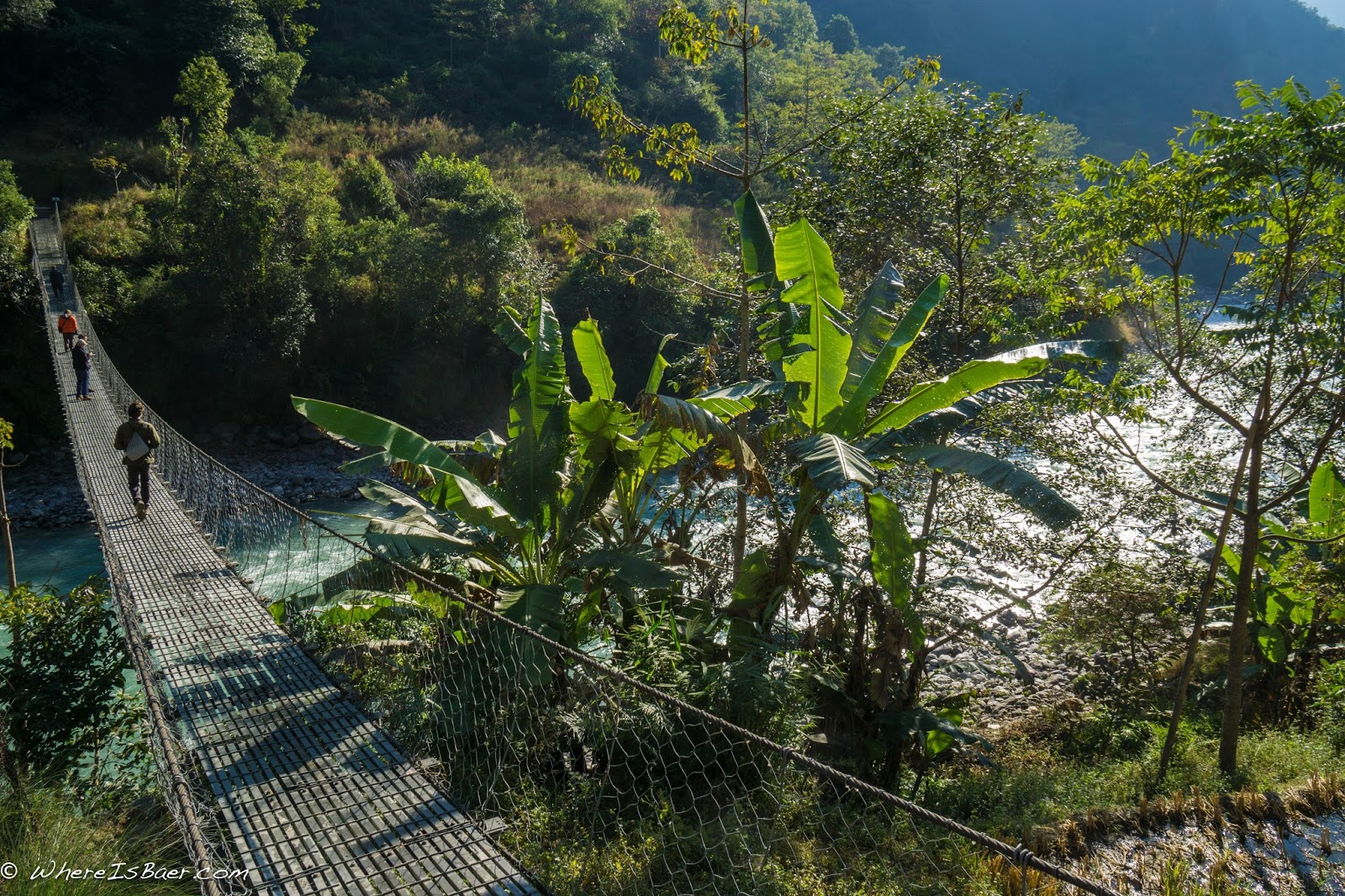 One of the dozen or so cable bridges spanning the river ©Chris Baer/kayaksession.com

Vertical Walls and Portaging Are a Trying Combination

We were only a kilometer downstream from the put in when Garen hopped out of his kayak to take a peek at yet another horizon line. This time, he had a different look on his face. There was contemplation, and maybe a bit of concern, as he shouted to me, “you’re going to want to take a peek at this!” The rapid was rather heinous. There was definitely a line, but it looked like one of those rapids that you fired up the day after you broke up with your significant other. Portaging looked almost equally heinous. We were heading into an uncertain black hole, with overhanging boulders looming above, and a 45 degree slope of slippery rocks coated in dark slime that all angled down towards the massive siphon that was the cause of our hike in the first place. Then there was the cave-like rock structure that we shoved our boats through. Then we precariously maneuvered a thin rock ridge thirty feet above yet more siphons. Next up was a small jump across a death crevasse, followed by a steep, overgrown hillside full of thorns. That led quickly into a dry creek bed with plenty of ankle-rolling sized cobble stones, and even more overgrown vegetation. I leaned into the melee of foliage with all my weight but the flora proved unresponsive to gravity. 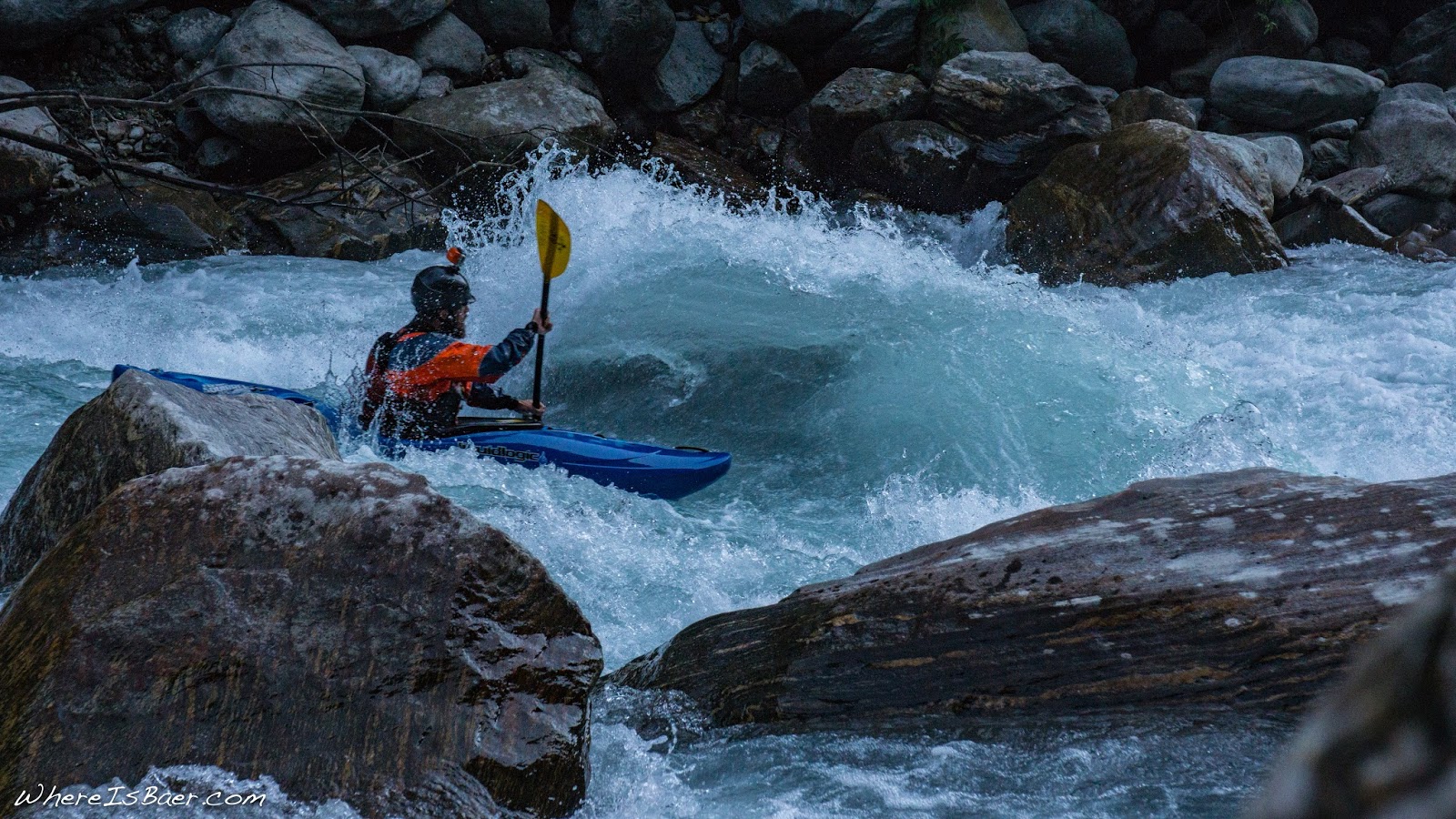 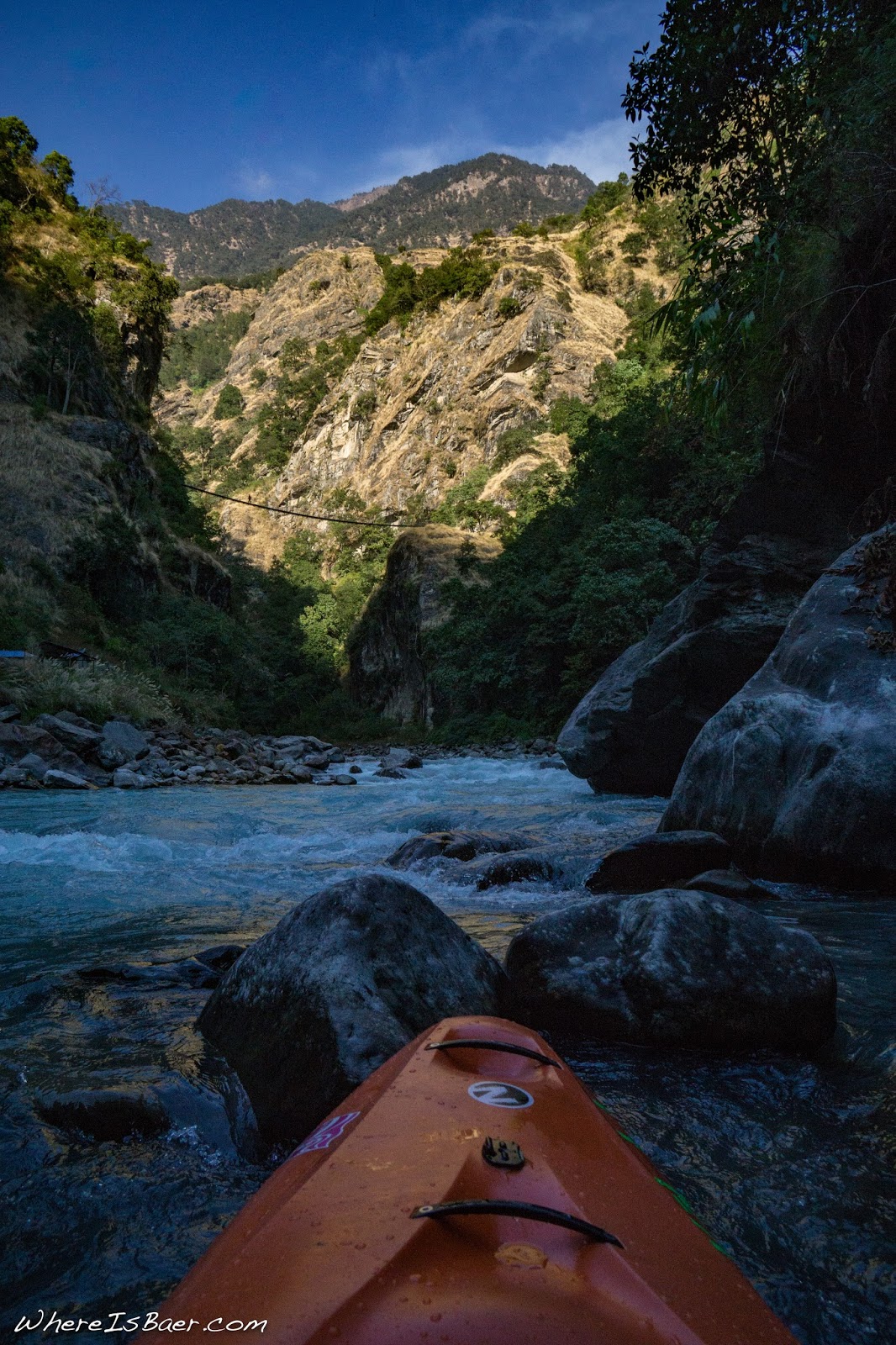 An hour and a half later we made it back onto the water. We were making slow progress. Continuous scouting proved necessary with yet more difficult, stacked rapids that had plenty of no-go locations. Time wasn’t on our side as the sun soon dipped behind the Himalayas. Graciously, the canyon walls momentarily subsided and allowed us an escape from the river. We had made such little downstream progress that we decided to walk the kilometer or so back up to the picturesque village of Jagat, where we enjoyed a relatively soft bed, hot food, and a cold beer. 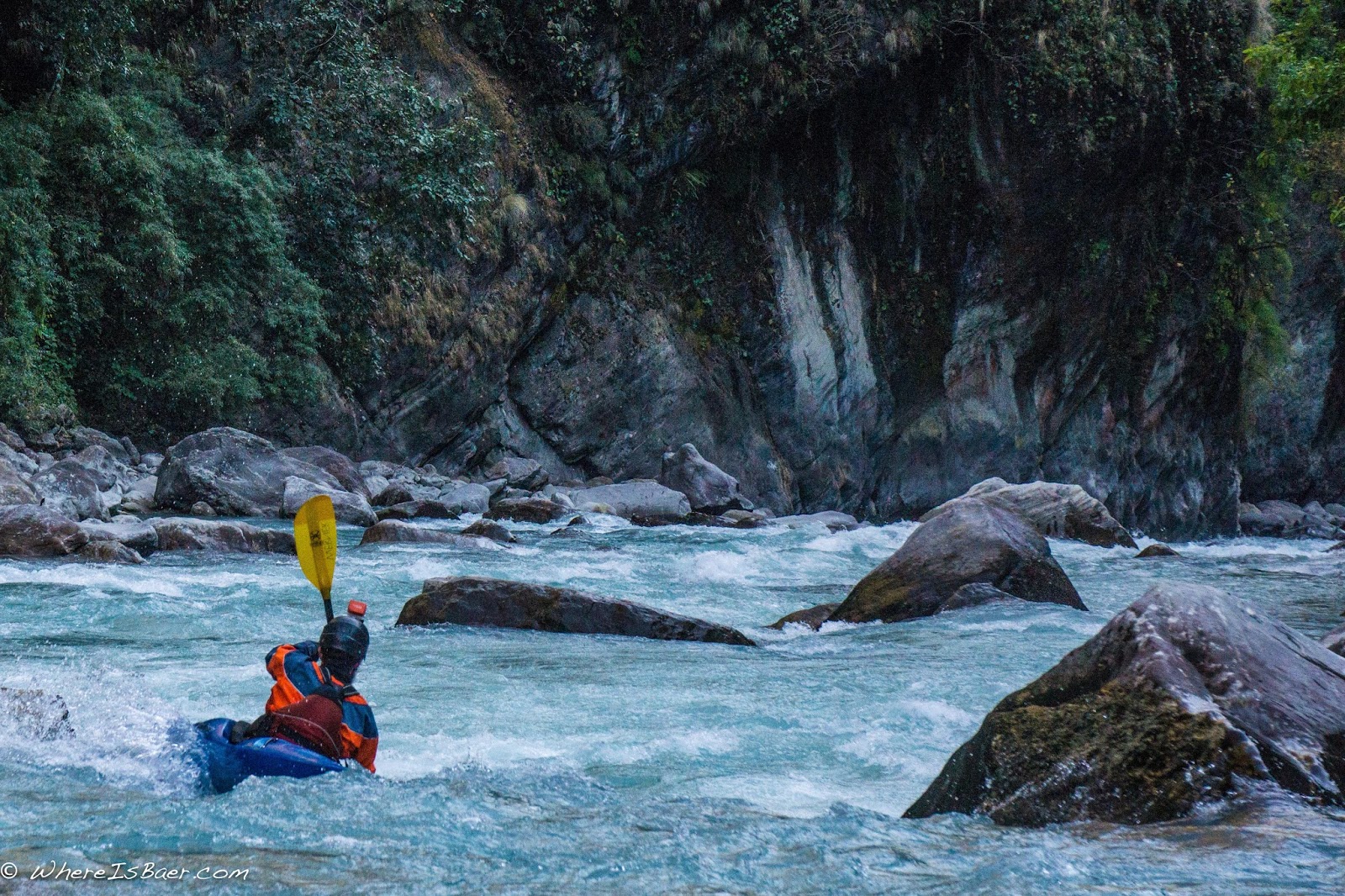 The early morning light illuminated the ridiculously steep valley as we hiked back down to the river. Our first rapid was rowdy and got us back in the spirit. The river was once again producing amazing whitewater, one great rapid after the next. Thankfully, we were able to boat scout significantly more rapids on the second day. The only portage that we encountered had a marginal line, but we just weren’t feeling it. Late on day two we stumbled upon a hot spring on river left (next time I might plan on camping at this location and enjoying the hot springs into the evening), but we continued down to the village of Lamjung where we spent the night. 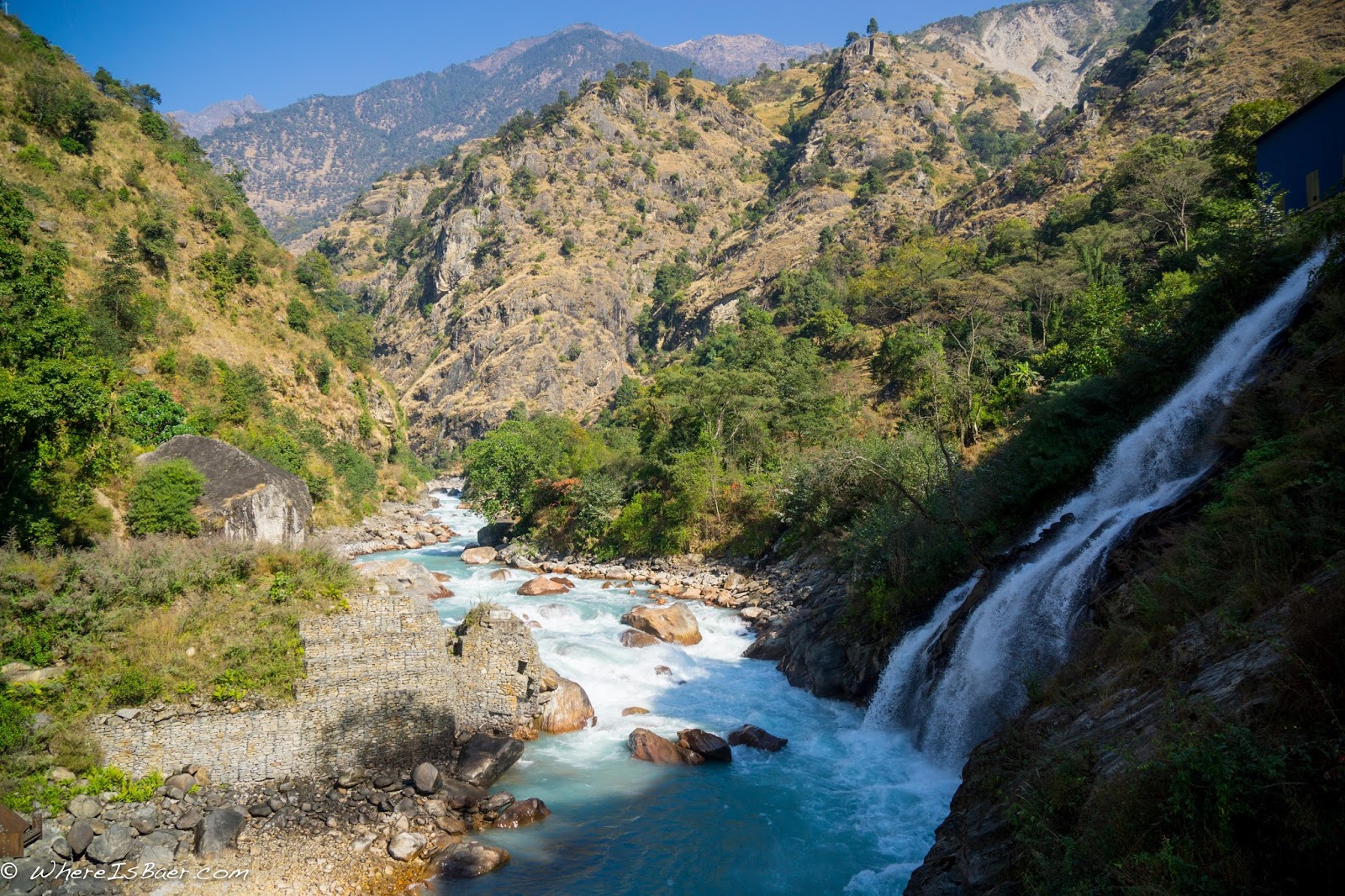 We had connected the sections. In total, it was nineteen miles of spectacular class 4 with a couple of bonus big rapids to contend with. If this river was stateside, it would be a true classic, with hordes of paddlers on it every day. 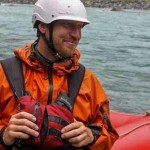 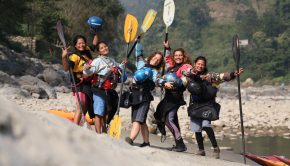 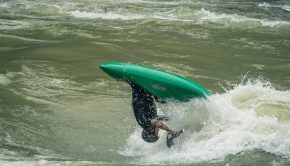