California was blessed with record snowfall this season and we were lucky enough to make it down for another year to be there once it all started to melt, with a strong representation from Tasmania/ Australia we left BC in the search for some Granite loving.
Round 2 in Cali saw us running new rivers and making life long friends in the blistering hot cali sun.
Whilst in California we soon become affiliated with Californian river roads which received substantial damage due to snow melt and rain which pushed our vehicles to some of their limits. We managed to blow 5 tires on the truck and the van didn’t make the journey back home. None the less the stoke stayed high as it turned into an unforgettable journey.
By: Scotty Hall/ Liquid Light From: Tasmania/ Australia 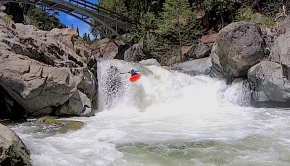