This is a first and only extreme kayak race organized in Georgia in the Caucasus Mountains in Central Europe.

The Country is located at the crossroads of Western Asia and Eastern Europe, it is bounded to the west by the Black Sea, to the north by Russia, to the south by Turkey and Armenia, and to the southeast by Azerbaijan.

Georgia is full of world class whitewater, suitable for kayakers of any level. That is why over the past few years Georgia became a popular kayaking destination on the world map.

The Bzhuhza Race is a Co-product of GNKF ( Georgian National Kayaking Federation ) and Two Blades Adventures.

In 2016 , for the first time in Georgia’s history was held an extreme kayak race , that hosted over 60 athletes from 11 different countries. Race became a huge surprise and fun for everyone involved. It had the most positive feedback possible both from Competitors and partners, so overall organizers decided to make the Bzhuzha Race an annual event.

Bzhuzha Race 2017  – will be held on 4-6th may 2017, on the same location. The Race includes : Qualification , Kayak Cross , Long Race and Extreme Race categories. Along the race program will be full of several concerts ,shows,  parties and kayak movie night – held on the beautiful camping site , set just by the river.

This event is supported by the local Regional Government, the Georgian National Tourism Administration and also by local and international sponsors.

Online Registration is now open on the Race’s official website , so feel free to register and join the unforgettable fun.

Watch the 2016 edition of the Bzhuzha Race 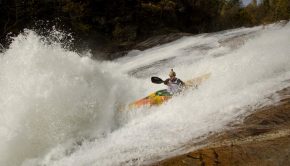 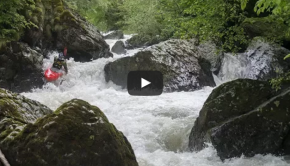