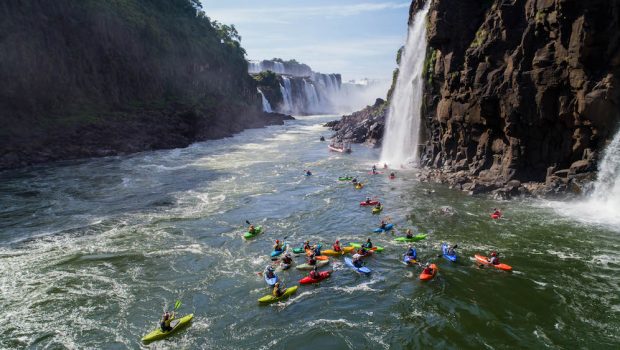 In 2019, after a paddle on the Iguaçu River, the river that forms the beautiful Iguaçu Falls, two kayaker friends, Márcio Bortoli and André Renato, decided to organize the first Iguaçu Falls Extreme Kayak Gathering. The event took place on January 25-27, 2020, in two different locations on the same river. One stage was in the city of Capanema on the 25th and 26th, and the other on the 27th in the city of Foz do Iguaçu, at the Iguaçu Falls.

Originally named The Falls of Santa Maria by Álvar Núñez Cabeza from Vaca, today the falls are better known as Iguaçu Falls. The term “Iguaçu” comes from the Guarani language, meaning “rio grande”, through the junction of y (water, river) and guasu (grande). In Spanish, Iguazú was adopted. No matter the name, this impressive cascade constitutes the largest falls in water volume on the planet. The waters erupt laterally from a deep crack, plunging 272 different times, with the greatest volume and force of water found in the falls called “Garganta do Diabo.”

The Iguaçu River bathes the Brazilian state of Paraná. It is a tributary of the Paraná River and is the largest river in Paraná. It is formed by the confluence of the rivers Iraí and Atuba in the eastern part of the Paraná municipality of Curitiba, along its border with the municipalities of Pinhais and São José dos Pinhais. Before the falls, the river is 1,200 meters wide, after the canyon is approximately 65 meters wide. The average annual flow of the Iguaçu River in the area of the Iguaçu Falls is 1,413.50 m³ / s, with flows around of 2,506 m³ / s at its peak in October, and around 1,326 m³ / s in the dry season of April. In the largest floods recorded, in July 1983, it had a flow of 35,600 m3 / s; at the river’s most critical drought in 1978, flow was recorded to be 89.92 m³ / s. After the falls, the Iguaçu River runs for another 23 km in length, along a valley embedded in a tectonic fault to form the border between Brazil and Argentina.

As the event took place in Iguaçu National Park, the organizer had to request permission from the responsible agency, Icmbio, represented by Mr. Ivan Baptiston, who promptly authorized the event for its sports, ecological and non-profit purpose.

More than 50 paddlers from various states in Brazil and foreigner paddlers from Paraguay and Argentina came to take part. To liven up the event, a rock band played several lively songs for all participants who toasted the musicians with lots of beer and barbecue. With its crystalline, emerald green waters, and a temperature of 28º Celsius, the river provided fun for everyone, including the children of the participants, who enjoyed swimming in its pools. 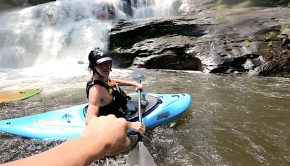 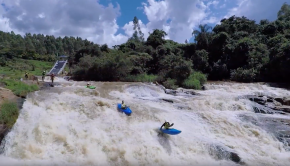 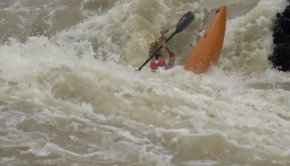