The Karnali. It starts its life from Mount Kailash, the center of the world for Hindus and Buddhist. After falling off the Tibetan plains, carrying on to be Nepal’s longest river, flowing between high Himalayan peaks, ancient forest, barren alpine deserts into lush jungle before finally breaking through into the flat lands of India. This short film captures just a tiny percent of what’s in the lower section. As a kayaker, rafter, nature lover or just human its easy to see why you would choose to visit this place. However much of what you see here is set to be destroyed. A large hydro dam will be built in this lower section, drowning this river and its wonderful symbiotic life systems. The real question is to the ignorance of humanity. Why the Karnali?
By: Jake Holland From: Uk 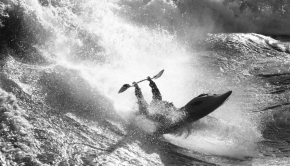