Watch Adrian Mattern getting stuck and beat in a pocket hole and end up swimming through a syphon on the river Oetz in Austria back in 2013.
« I was just about to depart to my first whitewater kayaking trip overseas to Chile. The plan was to paddle a last time in Europe before the season is over. With Sickline 2013 in mind, we went to Oetz and paddled all around the place;  back then I never ran on the upper Wellerbrucke yet (above the Sickline race course). After a long day of paddling in the valley we decided at around 7PM to go for a quick lap; nobody knew the lines and no one thought it would be clever to scout. I ended up following my friend down the middle on the rapid above the bridge, saw how he was a  bit right and got spun out so I decided to go a little bit more to the left. Next thing I know that I boof into a lateral hole which surfs/feeds me straight into a very bad siphon with no way to get out of there besides going through it. When I was in my kayak starting to backender and feeling getting sucked down I knew I had to bail my boat and just hope that the hole underneath the rock would be big enough to fit me through. That really for me was one of those moments when I was still kinda in my kayak just above the siph, I knew it would either fit and I’d be fine, or it wouldn’t and I’d be dead here real soon. No maybe. When I exited my boat I went deep, felt like I was processed into a sausage and finally popped up on the other side downstream. Then I swam down the rapid underneath the bridge, hurt my leg and barely made it to shore.
Definitely a very sobering and scary experience I really don’t ever want to experience again. I decided to post this now, 6 years later to hopefully show people what can go wrong if you decided to do stupid stuff. That’s really not something you want to learn empirical, I am beyond grateful that I am still alive and want no one to be in that same spot ever again.  So when in doubt, scout! Stay safe out there people! »

By: Adrian Mattern From: Germany
>>>Watch more Carnage Kayaking Videos
>>>Enter the 2019 HF° Carnage for All 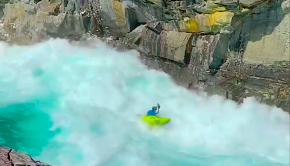 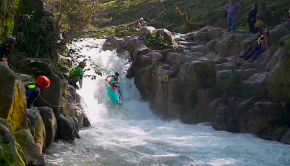 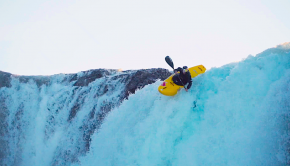