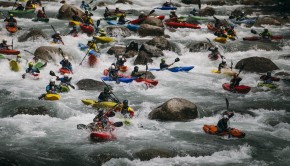 It is very difficult to be a King, but become one is even harder. The king of the alps is […

The King of the Alps held on the Italian Tyrol is back!!! And we’re super proud at Kayak Session Magazine […

First descent of double drop in pill (south-tyrol / italy) on a tributary of the Passer. by: Luca Daprà