Destination: A Northern Realm of Whitewater – High Water Nordland In the tiny town of Trofors, Norway, thundering rapids and […

Destination: A Northern Realm of Whitewater – High Water Nordland In the tiny town of Trofors, Norway, thundering rapids and [… Luke Pomeroy on the Skookumchuck Narrows 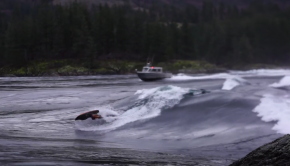 This last winter, I got a brand new Carbon playboat just before Christmas, so we went straight to the sunchine coast […

Some fun footage edited up by Airborn of FeatherWeight boats and crew ripping. The Feather boats are now available for purchase. […

Demshitz sings « Island Time » while waiting for Skookumchuck to come in

Skook is in for about 4 hours a day. The rest of the time in Egmont, BC is spent tannin, […

Short edit of some of our sessions on Skook this summer, one of my favourite waves in the world! Demshitz Skookumchuck […

Back to Skook with Gerd Serrasolses, Ben Marr, Matt Coldobella, Dave Fusilli. A perfect way to end up the year!&#