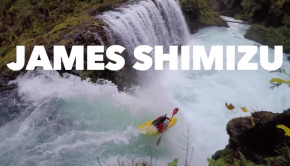 A rainy day of whitewater bliss in the Pacific Northwest with Ben Ghertner, James Shimizu and Jake Bouchelle. By: Jake […