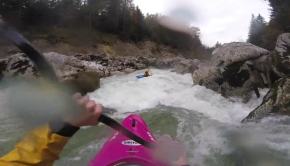 Home Runs. Lofer Gorge is one of the most well known runs in the Austrian Alps. For us guys who […

A short movie with Team Germany Freestyle rider Yannick Münchow,  kayaking at his local playspot near Cologne in Germany. by: Yannick […

Austria, Italy, Norway, Germany, Switzerland and France. Creeking all time classics and hidden gems. 2014 was the best 2014 i ever […