OUT AUGUST 5th Progression on the Indus – Face to face with Malupa For years, the Rondu Gorge of the Indus [… 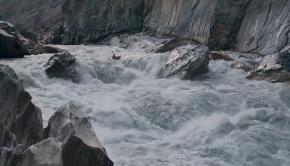