Each labour day weekend whitewater kayakers come from great distances to experience the steep, technical rapids on the Raquette River in Colton, New York. As part of the King of New York whitewater series, The Raquette Race is also held on this weekend and is considered to be the most difficult creek race in the North East. As each year goes by more and more people come out to experience the rivers. Paddlers, anglers, and spectators. As time goes on community understanding grows about the positive impacts these recreational water releases can have for enjoyment of the waterway and the surrounding environment. Thanks to American Whitewater and their positive relationship with Brookfield Power the river can be enjoyed for years to come.

By: Mike McKay From: Canada 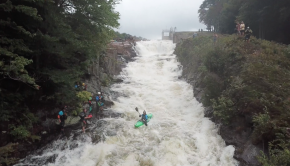