Made In Canada, The Taureau (Kayak Session Short Film of the Year Awards 2013 – Entry# 20)

Quebec’s Taureau section of the Jacques-Cartier River has been hailed as a classic for years. No one knows this better than the man who pioneered this class 5 remote section, Claude Page. For many, Page was the person who led them down the Taureau the very first time. For others he is simply a legend to Quebec kayaking. Made In Canada honours the Taureau through the words of the man who embodies the legendary status as much as the river itself. 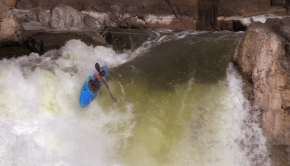