The year 2012 for whitewater kayaking is one to remember. It started in awe with the successful first descent of the infamous Inga rapids on the Congo River in the Democratic Republic of the Congo, likely the biggest rapids yet to be paddled. The film, Grand Inga Project (soon available on Epictv.com) has already won countless awards including Best Film at the X Dance film festival.

2012 is also the year that saw Spanish paddler Aniol Serrasolses push new levels of extreme paddling with countless stunts throughout the year. His peak demonstration was at the Voss Extreme Week in Norway where he ruled the whole event with incredible runs, even introducing downriver freestyle on 60+ ft waterfalls. Outstanding.

This year will also be remembered for the amazing spread of extreme races around the world. No longer is the racing scene about just a few fun events throughout the year; there are now many races, and the majority requires high levels of skill and commitment. Not only that, but many of them are also very media-friendly, which is helping the further growth of the sport. The Idaho Championships on the North Fork of the Payette River in Idaho is one of the best examples – an impressive event on an impressive section of whitewater!

And how could we recap 2012 and not mention the whitewater slalom event at the Olympics in London this summer, an event that was awarded most spectacular and telegenic by the Association for International Broadcasting. For the first time there were freeride boaters in the line up, and slalom and freeride paddler Vavra Haradilek from the Czech Republic made the whitewater social media headlines with his crowd pleasing moves and silver medal. Unreal! 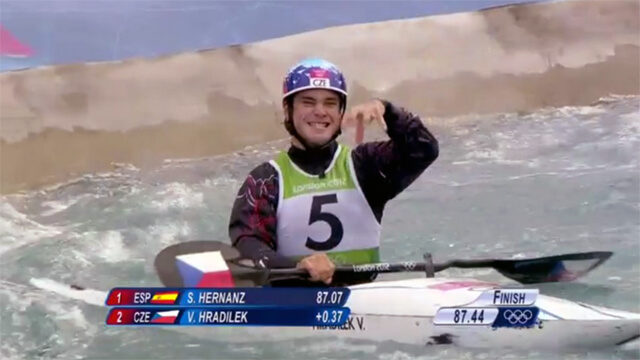 Vavra throwing a “brown claw” the rallying sign for hardcore freeride paddlers, in front of millions of viewers – this made the buzz within and outside the kayaking community. vavra ended up with a silver medal around his neck – amazing feat for this multi talented boater!

2012 has also been dubbed the year of the Stikine, as the run saw more descents than any previous year to date. Still humbling the sport’s most talented paddlers, it was a year of firsts on the Stikine, from tragic to outrageous to amazing. Clearly the run is still one of the hardest in the world, and there are just more and more paddlers out there ready to push themselves and the sport.

The end of the summer saw the gathering of some of the best freestyle at the Pre-Worlds Freestyle Championships held in Bryson City, North Carolina. The Worlds’ will take place there in September of 2013.

View the promo video of the 2013 worlds.

With October came the fifth Adidas Sickline Extreme Kayak World Championships  held in the Oetztal Valley, Austria. An impressive field of 150 of the world’s best kayakers from over 30 countries descended into this quaint quiet tourist town to battle the mighty rapids for a chance to grasp the World Title. This year’s field was the strongest yet and included Slalom Olympians, past world champions, current world champions, and a selection of the best whitewater ‘’huckers’’ on the planet. In the end, it was 24- year old Sam Sutton from Rotorua, New Zealand who won the Sickline World Title for the 3rd year, proving he is the man to beat on these rapids. 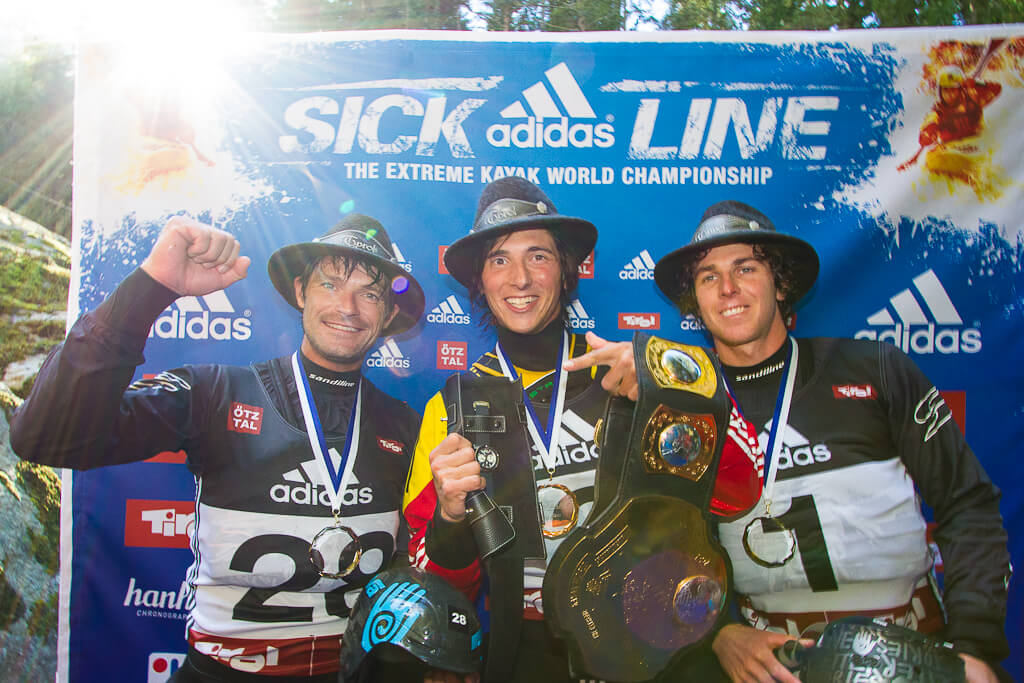 Of course the Green Race, now in its 16th year, cannot be omitted from a year’s best in whitewater kayaking. The unique (sponsor-free) event rallies hundreds of racers to the Green River Narrows. Some are going for the win and some are just trying to survive, while a large and carnage–hungry crowd cheers on every racer. Mike Dawson from New Zealand took the second Green Race Champion  title of his career, while local badass Adrienne Levknecht won her fifth straight women’s title and finished 31st out of 216 in the overall field.

2012 finished with the 2nd ever Whitewater Grand Prix, held this year in Chile. The WWGP gathers some of the very finest freeride paddlers in the world, racing and freestyling on some of the most committing runs. The combination creates a TV friendly show that brings whitewater kayaking to the pinnacle of action sports! American whitewater genius Dane Jackson took home his second WWGP trophy, and Nouria Newman (FR) took the honors in the women’s field.

This is stage 4 video report

Finally, December brought the announcement of the winner of the 2012 Best Short Film of the Year Awards, presented by Sweet Protection. Out of 51 entries and over 400,000 views and counting, the movie Unknow was awarded BEST SHORT FILM OF THE YEAR for 2012, and filmmaker Tino Specht walked away with US$5000.00 check!

View the winning movie here! the best short film of the year 2012!

All in all, it has been a fabulous year for our exciting and ever-evolving sport and all the passionate enthusiasts who make up the whitewater kayaking community.