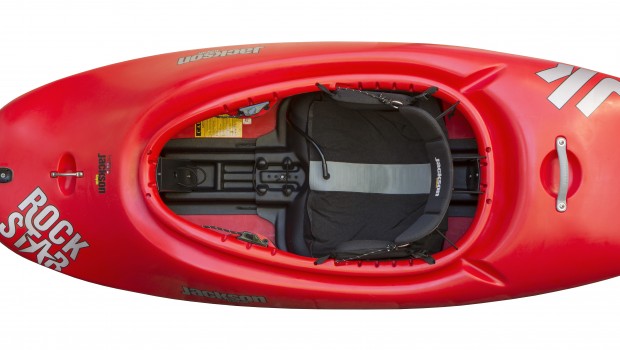 Jackson Kayak has changed its Rockstar series completely in today’s launch of the All-New 2014 Rockstar freestyle kayak. With a complete overhaul of the hull shape, improved outfitting and a never-before seen carbon outfitting option on its “Competition Version”, the 2014 Rockstar is available for order as of today. The carbon outfitting takes of valuable pounds from this freestyle kayak and has already claimed all podium positions in the later half of the US Freestyle Circuit.

“As a package I am prouder of this boat than any other whitewater boat we’ve ever made.” States Eric “EJ” Jackson, President of Jackson Kayak. “I’ve never seen a team with bigger smiles on their faces than after paddling the new Rock Stars. This boat has taken freestyle to the next level.”

The 2014 Rockstar is also available in an industry-first production carbon outfitting set up in the Rockstar Competition version. Carbon/Foam Core Hull Support is the foundation that allows the shortest, lightest, newest freestyle kayak design by JK to break all records for weight, performance, and fun. These attributes allow the 2014 Rockstar paddler get vertical easier, allows for bigger loop and increases surfing speed. Built with the 2014 World Freestyle Championships in mind, Jackson Kayak has been training and winning in this Competition model since early June with top 5 domination at both the GoPro Vail Mountain Games and FIBARK.

The 2014 Rockstar is currently available for ordering at all Jackson Kayak dealers.