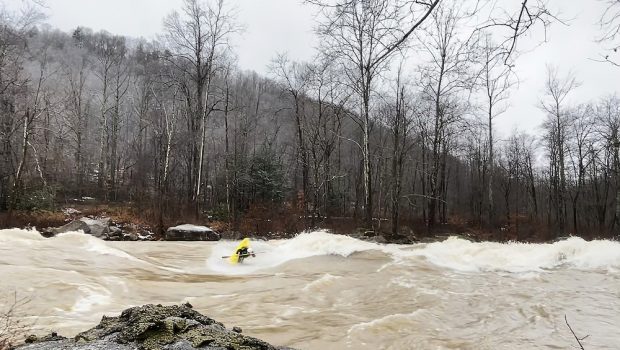 The headwaters of the Gauley flow out of the Monongahela Forest around Richwood, WV. These Class II-III+ runs offer dozens of miles of approachable whitewater. However, the Headwaters are easily overlooked by the vast amount of world-class whitewater downstream. For Shane Groves, growing up in the Headwaters alongside his brother was a blessing.  At the beginning of the pandemic, Shane and his wife moved back to the Headwaters to have their first child on his family farm. He has again found solace in the Headwaters during big rain events when he would normally be falling down steep creeks around Fayetteville, WV. Instead, cruising miles of scenic Cranberry, discovering quirky play around the Top Gauley, and catching big wave surfs on high water Cherry are a few perks. As February 2022 began, inches of snow melted with just over an inch of rain to bring the headwaters sailing past 10,000 cfs overnight. Though on daddy duty for the day, Shane was able to drop his daughter off at the grandparents and was at the Cherry Bomb Wave, just outside of Richwood, 20 minutes later. The Cherry Bomb Wave forms when the Cherry River constricts against a bedrock slide. Shane arrived as the Top Gauley was peaking around 18,000 cfs just downstream. The first surfs gave up a few big tricks in the second wave, a large foam pile with a sweet wave corner and an eddy. The top wave started to form little by little until it was near-perfect. Using the Jackson RSV, any wave trick felt possible. Connecting one wave corner to the next, Flash Backs linked to Clean Blunts and Pan-Ams—even a huge Air Screw. It was three hours of amazing surf as the temperatures dropped, turning the rain back to snow. Says Shane, « I’m so lucky to have these gems out the back door close to family and my WV roots. » 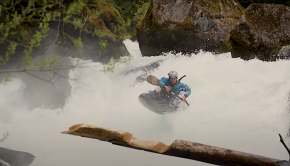 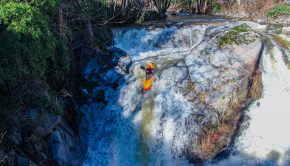 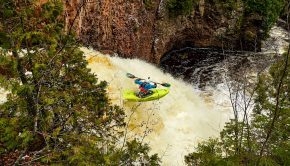 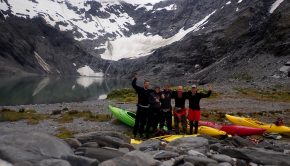