In early spring the Pyrenees still have a lot of snow, so Mikel Sarasola went for enjoying some new lines [… 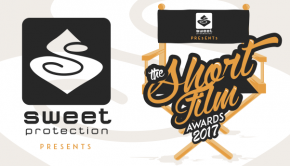 Short Film of the Year Awards 2017