A Return to Nepal – Episode 3: The Humla Karnarli (part2)

Luke Partridge and Jamie Greenhalgh return to one of their favourite White water kayaking destinations on the planet, Nepal.
This time with a big objective in mind, the mighty Humla Karnarli!
Follow this series of episodes as they prepare for their expedition and tag along on some of the best whitewater in the world!
Me and Jamie Greenhalgh had now been joined by our final team member David Doyle.

After tackling some large portages on the first couple days, our boats loaded with over a weeks worth of food and equipment making them heavy to carry and sluggish in the water, we finally got in to the more continuous sections of white water.
Over the next few days we paddled some amazing rapids through soaring canyons and huge boulders, camping in beautiful places. We stopped in remote villages on a couple of occasions and enjoyed swapping stories with the locals. Along the way and we always attracted a lot of attention and provided entertainment to those who rushed down from the hillside to river banks to watch us down the river.
Despite both me and David suffering bouts of sickness we still made generally good time down the run, and it became apparent that we were experiencing the river in higher than average flows for this time of year due to a late heavy monsoon.

A truly spectacular journey and a white water kayaking expedition of a lifetime!

Big thanks as always to: Pyranha Kayaks 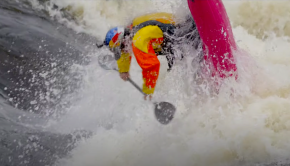 Product Spotlight: Jackson Rockstar V- Take Your Playboating to the Next Level → 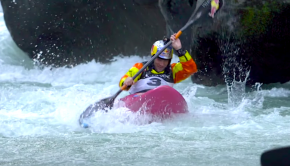 Happy Days in the Alps →