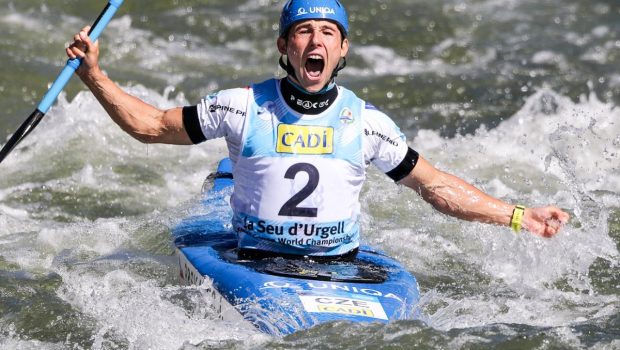 Prskavec added the 2019 K1 world title to the crown he won in 2015, while Herzog had double cause for celebration, picking up her first C1 world title as well as securing her ticket to Tokyo 2020.

The shock came in the men’s K1 final, where Great Britain’s Clarke, the Rio 2016 Olympic gold medalist, was squeezed out of the British Olympic team by Bradley Forbes-Cryans, who finished one place and just 0.89 of a second ahead in the final.

Herzog was assured of victory in the women’s C1, after reigning world champion Jessica Fox picked up a two-second penalty for a gate touch in the final. Herzog’s final margin over the Australian was 0.94 of a second, with Austria’s Nadine Weratschnig finishing third.

“I still feel really nervous, because I can’t believe that I can be a world champion and catch that Olympic spot,” Herzog said.

“I always knew that I could win a medal, but I didn’t think it could be a gold medal. I think I will need some days to understand what happened here.

“This has been a tough year for me, but I thought it would have to be a medal here. I just kept reminding myself that it was my turn, and that if I paddled well it could be enough for an Olympic spot.

The Czech Republic won’t finalise its Olympic team until early next year, but 2016 bronze medalist Jiri Prskavec put himself in the box position with a K1 world title on Sunday.

The 26-year-old ended a long run of minor placings with victory in the 2019 world cup final in Prague earlier this month, and then followed up with an electric final in La Seu on Sunday. As he did four years ago, he became world champion on the eve of the Olympic Games.

“This is so incredible for me, after winning the final world cup in Prague, and now this,” Prskavec said.

“I felt really in good shape. This is the biggest race of the year, and always the one before the Olympics is something special. Countries are trying to win Olympic quota places and there are individual selections, so it’s super nice to be a world champion again.

“This is our first selection race, and I was coming into it to show my best. It was really hard to concentrate, but I did it in the end and I’m now a world champion again.”

Local hope, David Llorente, posted the quickest raw time on the course, but a two-second penalty dropped him to the silver medal. But his result confirmed his place at next year’s Olympics, and a return for Spain after the country missed the men’s C1 in Rio.

>Find all the results here