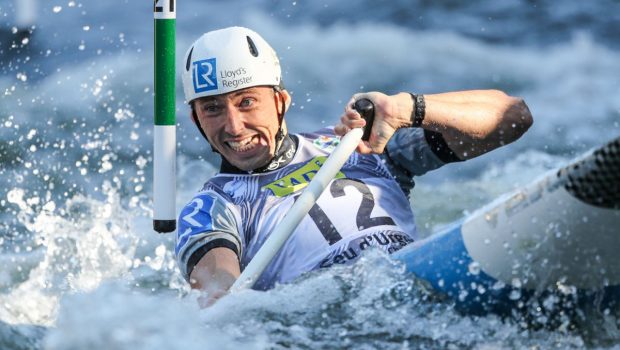 The pressure of Olympic qualifying weighed heavily on the world’s best canoe slalom paddlers on the opening day of individual competition at the ICF world championships in La Seu, Spain, with one big name casualty and several others living dangerously.

Great Britain’s David Florence, a three-time Olympic silver medalist, showed he is ready for the fight for the one available C1 place on the GB Olympic team with a slashing qualifying run of 94.48, 0.49 seconds ahead of Slovenia’s Benjamin Savsek, with British teammate Ryan Westley third.

“To be totally honest, the really important thing for me was to make it through to the top 20, because I really need to just take it one step at a time,” Florence said.

“There’s a lot going on, it’s a massive week for all the guys in our team, and for so many teams who are looking to confirm their Olympic places and are fighting to get a good start for their Olympic selection.

“It’s just part of our sport, I’ve done it a lot of times before. It’s really tough because the guys I’m coming up against are really good. Undoubtedly it’s nice to put in a fast time, it definitely gives you a bit of confidence going into the semi.”

France’s Marie-Zelia Lafont was the stand-out performer in the women’s K1 qualifying, the only athlete to break 100 seconds and one of only a handful of female athletes to complete the course without any penalties.

“When I started my run I had a really good feeling and had a good line which I held until the finish line,” Lafont said.

“Sometimes you have a good feeling and you don’t know why, so this is so cool. I like paddling here, it is so near to France, and I love the Spanish spirit.

“This is not finished, so I need to stay concentrated. It’s important for the Olympic selection, but for the moment I just want to paddle and we will see what happens.” Among those who had to work hard on Thursday to progress were New Zealand’s Rio 2016 silver medalist, Luuka Jones, two-time world champion Corinna Kuhnle of Austria, and British pair Fiona Pennie and Kimberley Woods.

The quartet needed a second run to progress to Saturday’s semi-finals.

In the men’s C1, where the top 11 countries will all earn quotas, there are 16 different nations represented in the semi-finals.