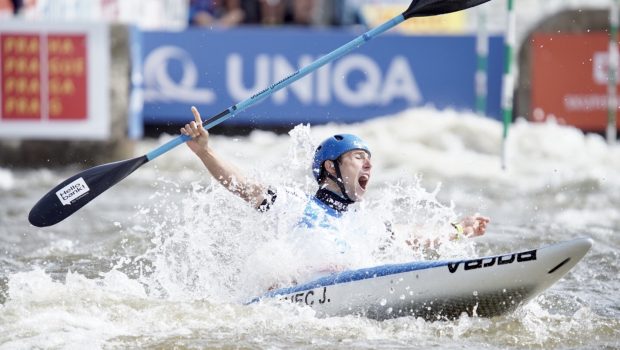 Saturday Sept 7th,  C1 Women and K1 Men’s Finals
Czech Jiri Prskavec sent his home crowd into raptures and Australia’s Jessica Fox held on by her fingernails to both claim canoe slalom gold and wrap up the overall season titles on the final day of competition at the ICF world cup in Prague on Sunday.

Fox once again proved her dominance of women’s canoeing, taking the C1 gold medal to add to the K1 she won 24 hours earlier. It also meant that, like 2018, she won both the K1 and C1 overall world cup titles.

But she only just held on to win on Sunday, positing a time 0.04 seconds quicker than Great Britain’s Kimberley Woods in the C1. Czech Tereza Fiserova was third.

“I think every race has been pretty tough and challenging, and I think after yesterday’s win, it was such a big win for me, so I wanted to come back today and go through the process again and stay grounded,” she said.

“It wasn’t perfect, and it was a fight to the finish. My goal is always to put down my best runs, not win the overall world cup, that’s a bonus of doing consistent races.

“It wasn’t the perfect season like last year, but I’ve learned so much from every race that I’ve done. The competition in the C1 category is getting better and better, the girls are hungry and improving a lot, it makes me really proud to be in this category.”

Fox finished well ahead in the overall standings, finishing with 312 points to Brazil’s Ana Satila on 225 to make it three C1 titles in a row. Fiserova was third on 222 overall points.

After 14 world cup finals without a win, Jiri Prskavec sizzled down his home course in front of a capacity crowd to take his first world cup title in three years, relegating Czech teammate Vit Prindis to second, and Frenchman Boris Neveu to third.

“It’s finally happened, it took me three years, but it was amazing to win in front of my home crowd, where I grew up,” Prskavec said.

“It feels amazing, I have grandmothers and Aunts and so many people from my family here, so it’s special that I gave them something back.

“It also feels special to be overall winner again. I don’t know how many other paddlers have won two in a row, so it’s a special moment as well.”

Germany’s Sebastian Schubert is the only other athlete since 2000 to successfully defend a men’s K1 overall world cup title.

Sunday Sept 8th,  K1 Women and C1 Men’s Finals
Australia’s Jessica Fox broke through for her first K1 win of the 2019 season and Slovakia’s Matej Benus posted his first win for more than two years on the penultimate day of competition at the ICF canoe slalom world cup final in Prague on Saturday.

With their wins both Fox and Benus also locked away the overall world cup titles for 2019, and also took important steps toward qualifying for the Tokyo Olympics.

After dominating the women’s K1 for much of the 2018 season, Fox has not been able to get back to the top of the podium in 2019. But the two-time Olympic medalist got it right on the challenging Prague course on Saturday to win by almost three seconds, with Slovenia’s Eva Tercelj third.

Fox felt it was close to her best form.

“I think so, I think today was really exactly what I was looking for,” she said.

“I’ve been training so well here, so I really wanted to put it together. It was just about getting that run out.

“Just to deliver that in the final, I was so pleased. That was the elation when I crossed the finish line. I’m really pleased with today, it could not have gone better.”

Fox was also rewarded for her consistency with the overall K1 world cup title, defending the crown she won last year.

It’s been a long season, but now all the world cups are done, we have a couple of weeks off, so I’m happy to finish the world cups on this note, and looking forward to being back in Seu.”

The main priority for Matej Benus on Saturday was finishing ahead of his Slovakian teammates, Alexander Slafkovsky and Michal Martikan, as the trio do battle for the one available C1 slot for Tokyo.

He made certain of the result by winning the men’s C1 final by more than two seconds, with Russia’s Kirill Setkin second and Slovenia’s Luka Bozic third.

“Winning is always difficult, so I’m super happy I won this one,” Benus said.

“It’s pretty difficult because just one guy can go to the Olympics, and there are three Slovaks in the top five. So it’s very important to have a good final, and be mentally strong.”

“The guys from Germany, Czech, Great Britain, Slovenia – they are so strong, so you need to have a good run if you want to win a medal,” he said.

“Sometimes I have a good run and I don’t win a medal, but that’s alright.” 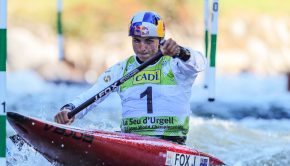