Czech paddlers flexed their muscles on the second day of the 2019 ICF junior and U23 canoe slalom world championships in Krakow, Poland, qualifying quickest in three of the four races contested andwinning the only gold medal on offer.

“I can’t describe it, I am very happy,” Kratochvil said.

“It’s been a great start for Czech Republic here, I hope everyone else can do the same.”

“It is amazing for me, I can’t believe it,” Kneblova said.

“Of course we were very nervous. We just kept telling each other it would be okay.”

Spain’s David Llorente finished top of the table in the men’s U23 K1, but he was the only athlete to withstand the Czech onslaught at the Kolna slalom course.

“The top part was not that good, but the bottom part was really good. But I was quite surprised that I qualified first,” Chaloupka said. “Because I didn’t make the senior team this year, this event is my goal for the season. And I’m defending the title, so it’s a good start for me.”

2019 European champion Amalie Hilgertova again showed what she is capable of, setting a penalty-free time of 100.60 to qualify quickest in the women’s U23 K1.

The Czech finished ahead of Slovakia’s Eliska Mintalova on 101.47, with defending U23 world champion, Camille Prigent of France, third quickest on 102.94.

“I was a bit stressed before my run because I didn’t watch the time properly, and I had ten minutes less than I wanted to before the run,” Hilgertova said.

“So I was a bit stressed out, but the run was quite good I think. Some of the gates were a bit tricky, but I handled it well.

“I usually work well under pressure, so that’s good.”

The much anticipated U23 C1 women’s battle between Czech Tereza Fiserova and Brazil’s Ana Satila lived up to the hype, with Fiserova finishing the qualifying run just 0.29 seconds ahead of the two-time Olympian, with both athletes picking up two-second penalties.

“I felt good, I think that my run was good,” Fiserova said.

“In C1 you only paddle on one side, but in K1 its both, which helps my canoe.”

Slovakia’s Monika Skachova was third fastest, just 0.16 seconds behind Satila. The fastest raw time on the course though was set by Russia’s Alsu Minazova, who picked up four seconds in penalties but still managed to finish just 1.62 seconds behind Fiserova.

Llorente, the 2018 European K1 champion, was the last paddler on the course in the men’s U23 K1, and after picking up an early two-second penalty, zipped down the course in 92.53 seconds, one second faster than New Zealand’s Callum Gilbert.

“I had a touch at the beginning, which wasn’t part of my plan because I was planning to conserve my energy,” Llorente said.

“But after the touch, I thought maybe if I do another touch that will be trouble. This is my last year of U23, and I would really like to finish with a win, but there are a lot of good paddlers here.”

The 2019 ICF junior and U23 canoe slalom world championships continue in Krakow  with junior K1 and C1 events and the U23 mixed C1 final coming next. 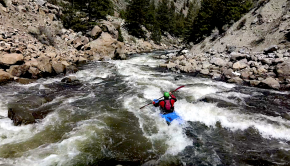