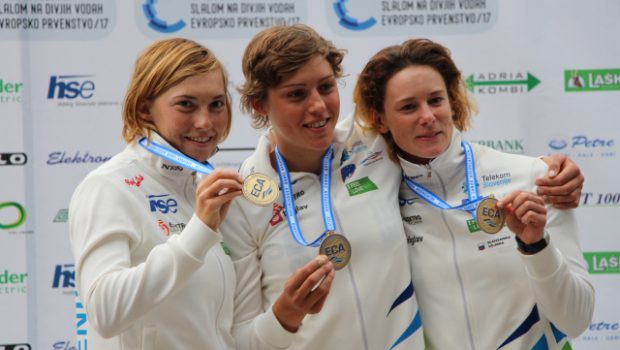 The medals were shared among paddlers of France, Great Britain, Czech Republic, Slovenia and Germany. All the team events were held today in the capital city of Slovenia, and brought some interesting results. Slovakia failed to win a medal both in C1 and C2 men events where they were defending champions.

Mallory Franklin, Kimberley Woods and Eilidh Gibson proved why they were considered one of the main favourites on this tricky course on the Sava River. They defended their title from last year’s European Championships in Slovakia. Team of Germany – Andrea Herzog, Lena Stoecklin, Birgit Ohmayer – was second and Czech Republic (Tereza Fišerova, Monika Jančova, Eva Rihova) finished third.

Jiri Prskavec and Vit Prindiš, last year’s K1M team European Champions, were this time accompanied by Ondrej Tunka who replaced Vavrinec Hradilek in the team from last year. This did not cause any troubles to the Czech team who once again reached the top podium position.

“I am really happy that we won again after last year. It was a really tough racing and it was very tight, but we were at the right side of the clock at the end. I am really happy,” said Jiri Prskavec.

Vit Prindiš was also very happy about the outcome.“I was hoping for it. At the top there was a big pressure on us, because we knew many teams went well, we saw Poland which had a really nice run. We knew we have to go really fast and clean. We made it and I am super happy now.”

“We only had selection races three weeks ago, so we did not train much together. But I spent a lot of time paddling here, so I was well prepared,” added Tunka.

Urša Kragelj, Eva Terčelj in Ajda Novak won the historic first gold medal for Slovenian K1W team. The women celebrated their gold medal in very unpleasant weather conditions. Just after the Slovenian team crossed the finish line a big storm hit the venue, including hail, so the conditions became very tough and the organisers were forced to postpone the men’s C1 event.

In the morning part of the second competition day Matej Benuš (SVK) crossed the finish line in men’s C1 heats with the fastest time to successfully advance to the semi-finals on Sunday. German paddler Sideris Tasiadis was second and Czech canoeist Michal Jane third.

Also the second day of qualifications brought some surprises. Slovak C2s Hochschorner brothers and defending European Champions Kučera – Batik who failed to proceed to semi-final yesterday, were accompanied today by several well-known names, such as David Florence, Elena Kaliska, Štepanka Hilgertova, who also failed to qualify for the semi-finals.