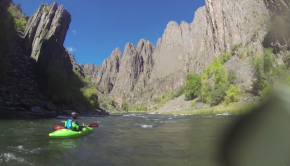 Black Canyon of the Gunnison

Gopro edit of a trip down the Black canyon of the Gunnison river. « I made 2 trips into the black […